Honouring a few of our dead 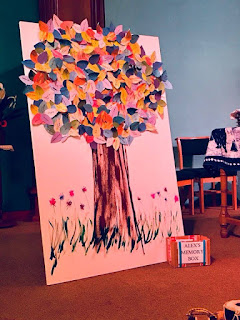 We were marking Transgender Day of Remembrance and we couldn't read out all the names.

We used to be able to, but the number grows each year and now there are too many.

Alex, the celebrant, had brought this very beautiful tree into church.

It represented the tree of life.

Each leaf had a name, and each name belonged to a trans person murdered last year.

Murdered just for being who we are.

When the time came, he suggested we each take a cluster of leaves off the tree and take them home.

And find out what we could about each name.

And by the end, the tree was completely bare. 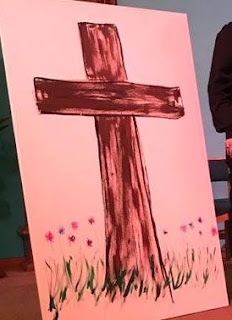 And so I went home, and this is the story of the names I found.

Bruna Ferrari was killed on the fifteenth February 2018 in Concórdia do Pará, Brazil.

It is not known how she died, or why, or anything about her.

Except that she was 17 years old.

Verónica Carvajal was killed on the 27th November 2017 in La Paz, in Bolivia.

She was strangled by her partner, Carlos Alberto V, because she was the breadwinner and had refused to give him the money she had earned that night.

Macumba was killed on the 11th November 2017 in Veracruz, Mexico. No one knows how old she was, or what she did for a living. Someone ran her over with a car. And then they fled.

They have not been found.

Lucky Salavuki was killed on the 17th May 2018 in Suva, Fiji. There was a massive wound in her head where she had been hit by a large stone.

She was found on the foreshore lying in a large pool of blood. She was 23 years old.

She was an activist, who had recently come out as trans, and she was excited about contributing to the movement to improve transgender peoples lives.

Her friends described her as an outgoing person who was always happy to make other people smile.


Rafella Rotocalco was killed on the 11th September 2018 near Rome. Her body was found on a beach.

She came from São Paulo, Brazil, was stunningly beautiful and worked as a sex worker.


Lorrany Lhoane Oliveira was killed on the the 26th December in Santaluz in Brazil.

She was tortured to death.


Blanca  was killed on the 27th January 2018 in La Vega in the Dominican Republic. She was a sex worked. Her age is unknown.

She was stabbed. There were no witnesses. Her murderer has not been found.


Chandraiah was killed on the 26th May 2018 in Hyderbad, India. Her occupation is listed as, quote, other.

She was 52 years old. She was beaten to death by a mob who had gathered in the mistaken belief that she was a child kidnapper.


Charly  was killed on the 22nd March 2018 in Puebla, in Mexico. She was a hairdresser and beautician.

She had been suffering aggression from strangers for quite a while.

On that date they entered her apartment and decapitated and dismembered her.


Marilyn Cipriany Guzmán was killed on the 30th December 2017 in Medellín, Columbia.

Two men drove up to her on a motorbike while she was walking in the centre of town. One shot her three times and left her bleeding. Then he got back onto the motorbike and they drove away.

Not long before her death she gave a newspaper interview in which she said that whenever she tried to get a job or go into a shopping centre she suffered insults and discrimination.

But this did not happen to her on the street, she said. "People think that because people like me work on the street, we have no morals. But we are human beings and we have the right to equality."


Jessica González  was found dead on the 11th January 2018 in Veracruz, Mexico, two weeks after being reported missing.

She was a sex worker. The cause of death is unknown. Her age is unknown.


Phylicia Mitchell was killed on the 23rd February 2018 in Cleveland, USA.

She was 45 years old and a hairdresser and beautician.

She was shot in the chest in the street outside her home.

Her partner Shane said "Everyone loved her. She was just so funny and so kind".


Krispim Sousa de Araujo was killed on the 14th August 2018 in Mossóro, Brazil.

She was shot three times and dead on arrival in hospital.


Karla Patricia Flores-Pavon  was killed on 9th May in Dallas, USA.

She was strangled to death in her apartment. Her occupation is unknown.

She was found in her apartment with twelve stab wounds to her chest and others all over her body.

She had visited her mother a fortnight before and had not mentioned being in any kind of trouble. Her family had asked the police to investigate her death because she meant no harm to anyone.

Her occupation is not known. She was 39 years old.

Their occupation is not known. They were 26 years old.

They were stabbed in the chest while out walking with a friend.

She was 30 years old. Her occupation is not known.

She was asphyxiated. She was found in the street with a bag over head.


Lohane was killed on the 23rd January 2018 in Governador Newton Bello, Brazil.

She was stabbed by her boyfriend in a fit of jealousy.


Abya Passos Mantovanny was killed on the 15th September 2018 in Cuiba in Brazil.

She was stabbed 15 times by her boy friend in a club.


Joan Thabeng was killed on the 11th November 2017 in Mohlakeng in South Africa.

Her age was not reported. She was a clerk.

She had been on her way to visit her boyfriend.

She had been dragged through the streets before being dumped.

Police appear to have made no serious attempt to find her murderers.

May they all rest in peace. May eternal light shine upon them.