Little islands of light as we remember in darkness

Someone asked me to write down the answer the other day: so she could use it in the Transgender Day of Remembrance event she was organising in Oval House.

"I am my daughters’ dad and my grandson’s grandma.

I’m my own father and my own mother too.

I embody a new way of being in the world”.

And it became a statement on a piece of paper beside the names.

The names in the ceremony: where we read out the names of all the trans people who’ve been murdered in the past year for being who they are.

There are two hundred and twenty three this year and beside each piece of paper was a tea light and a box of matches.
When we entered the space we found ourselves next to a group of each: and our task was to make sure that all the lights beside us were lit.

And then the electric lights were dimmed and we began to read out the the names. And the statements. And blow out the candles one by one.

Until we were in darkness.

One of my names was that of an eight year old child. They were beaten to death by their parents for being too ‘effeminate’.

Other bits of paper just said “Blow out the candle”. And that was hard to do. Because these marked the trans* women who were murdered and who had no name.

Snuffing out their light felt like an enormous crime.

It was very strange, somehow, to hear a perfect stranger read out mine.

And when all the lights had been put out, and all the deaths acknowledged, one by one the lights were lit again.

And there we were, surrounded by little islands of light in an ocean of darkness. 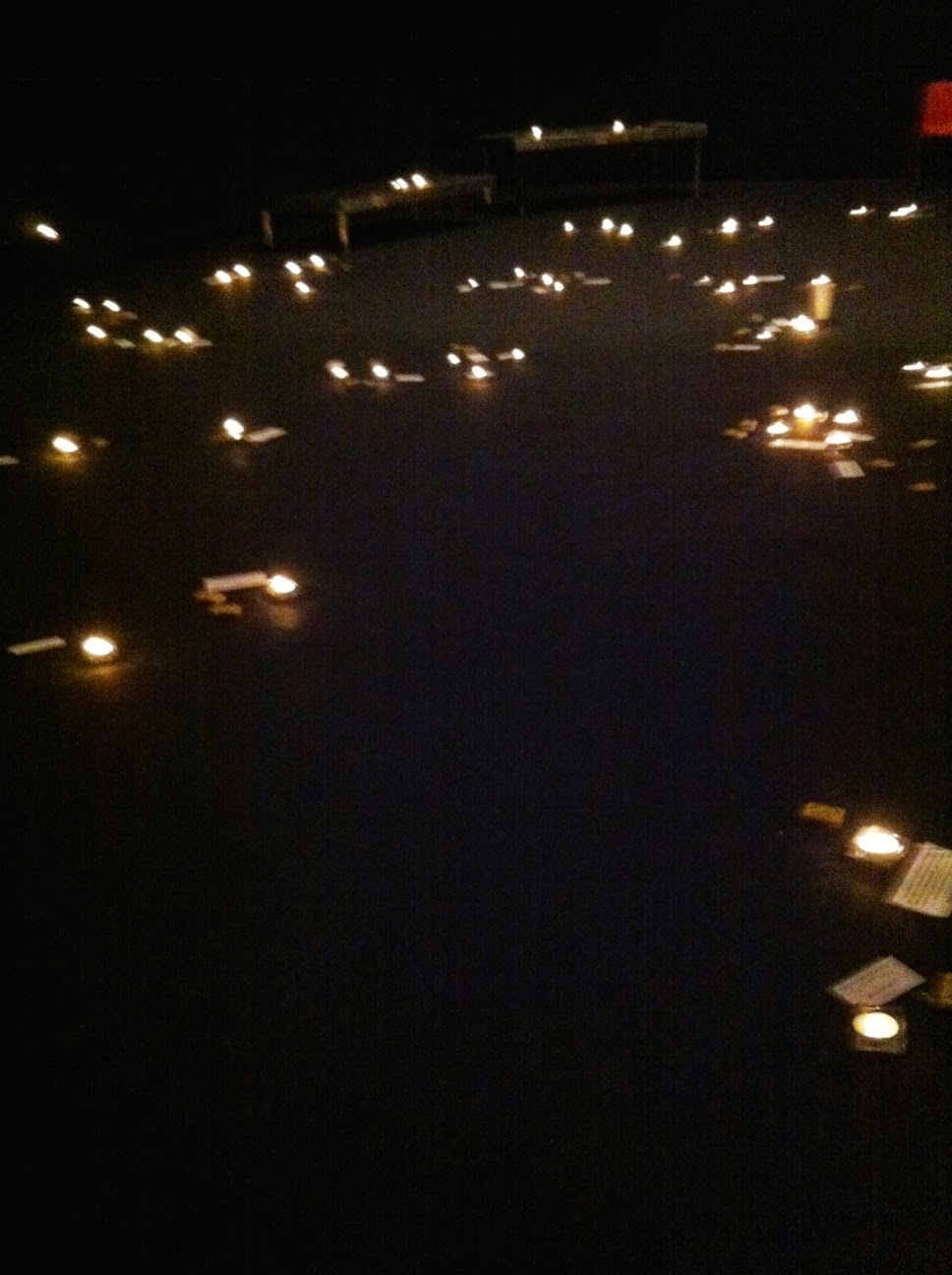 And everyone left in silence.

I saw the man who had read out my statement carefully putting it in his inner pocket. So I told him it was mine and thanked him for reading it.

He looked me very firmly in the eye. As if what i had written meant something very profound to him. And he shook me firmly by the hand. And then left without saying a word.

And I knew I should go too.

Only I couldn’t bear to leave, somehow.

I couldn’t bear to leave all those lives behind, and the thought of what they achieved in the world.

And I thought of my own life, and how lucky i am still to have it; and began, yet again, to deal with the paranoia of the thought that I may be making myself a target and may even end up as one of those names some day.

And I thought of my family and all they, too have suffered. Suffered because of me being who I am.

Not that it’s my fault or their fault or anyone’s fault: just a function of the hatred and the prejudice and the fear we all live in..

And when I eventually got up to leave i was hobbling. My legs just so sore with all the hatred we have absorbed together.

And I wondered if there’s a candle to commemorate them. A candle to make them better.

Knowing that anyhow it matters to continue to resist. And keep trying.

Hoping that somehow we will find an end to all this pain.

FOR TRANSGENDER DAY OF REMEMBRANCE

Last week I posted a showreeel.

Nothing special about that, really: there must be hundreds and thousands of them out there on the internet.

Hundreds and thousands of young hopefuls compiling film clips to show off their acting skills.

it’s true that, being in my mid sixties, i am a little bit old to be a young hopeful…

But that’s not the main reason why my showreel seems special to me. it’s special because for most of my life the idea of putting such a thing on display was literally unthinkable.

Unthinkable because i absolutely knew for sure i could not act and never would.

Just as for an absolutely horrible few years of my life I thought i would never be able to have a relationship with anybody or have children. Never even have sex with anybody, in fact.

All these terrible, false and destructive ideas were put into my head my the intensity and power and universality of the prejudice I suffered when i was still a child.

Lately I’ve recovered a memory of somehow being in my boarding house at school wearing the purple trouser suit i wore as Lizzie in “Next Time I’ll Sing To you” and feeling happy and confident and gay in every sense of the word and someone saying “You really enjoy wearing that”.

Not in an unkind way,actually, but as a simple matter of fact. i did feel just so effortlessly more like myself, somehow, and for the first time feeling like there really was a place for me in the world.

But at the same time I understood that i was giving myself away: that I was making it clear to everybody - including myself - that deep down I wanted to be a girl.

Which was, at that time and in that place, the very worst and most shameful thing a boy could ever want to be.

And at that time and in that place there was no help anywhere.

And that was the main reason I stopped acting.

I’ve put off writing those words because they still hurt.

I try not to think of what might have happened if I’d been able to live my full vocation from the beginning instead of having to struggle with all my strength to remove the obstacles that stood between me and fulfilling it.

I’m grateful instead that after twenty years trying I finally did find my voice as a playwright; grateful for the inner voice fed by my instincts as a performer that still keeps right as a writer; and for the ferocity of the inner need that drove me, even if despite of myself, to write for the theatre.

Now I have learnt to live openly as a woman, it must be those instincts, I think, that have guided me back to where I started all those years ago, when I was still a boy: that I love acting, when I do it I feel such a deep connection with my fellow human beings and my own deep self and feel so at home in the world.

I’ve done with the help of my amazing family and my colleagues and my friends, and it’s only taken fifty years.

And here i am: bloodies and bowed. Bruised and a bit arthritic… but still here.

And that’s something to celebrate, i think.

Those shot or stabbed or strangled or tortured or beaten or otherwise done to death.

Those whose murderers have not just been content to end their lives but have been impelled to go on and on destroying our brothers and our sisters bodies in countless cruel and vicious ways.

It’s important these people are named and honoured and remembered.

But I also think of those whose lives prejudice still continues to blight. Those who are still struggling. Those who have given up.

I think of my sisters and my brothers in lonely rooms. Nursing their lonely dreams.

Or because the discrimination they suffer at work leaves them no other realistic option.

I think of all the scientists, managers, statespeople, artisans and srtists; all the teachers and parents: all those whose talents have been blocked by prejudice and discrimination and may never be fulfilled.

There are just too many names.

In its current crisis, the world so needs these talents and cannot afford to lose them.

Prejudice, discrimination, injustice damage us all: ending them is the business of everyone.

Otherwise the suffering is just too great to bear.

I find it so easy to be possessed by rage or overwhelmed by grief. So easy to be driven by terror or self hatred or the need for revenger.

I try to remember what my trans* Jesus says. Says as she lights the candles:

“They might try to put out your light.
They might throw stones at you for allowing to shine.
They might spit on you or shout after you:
“Faggot! Pervert! Maricón!”
Or maybe they’ll laugh and shout: “Look! It’s a geezer!”
Or call you a pervert or an open sewer.
They might do worse: they might beat you
Or torture you and kill you
And throw your body into a skip.
Because these things happen.
But I say to you:
Bless you if people abuse you or persecute you because it means you are bringing about change.
And bless those who persecute you too because hatred is the only talent that they have
And it really doesn’t amount to much.
They will lose it in the end.
because whatever they say or do they cannot stop the change that is coming.


And one day we will all be free.”