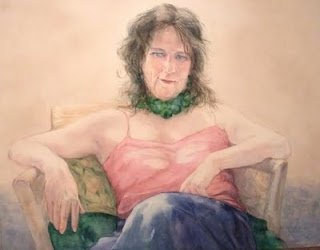 About 18 months ago I was presented with this beautiful portrait.

It’s by a very wonderful Edinburgh artist called Fiona Robertson and I was so overwhelmed by the skill and beauty of it that for a long while I haven’t quite known what to do.

The I decided to unveil it at a party last night to celebrate the first anniversary of my gender anniversary certificate.

I called it a birthday party because in many ways that is what it was.

I’ve never been good at celebrating birthdays. Maybe because my mum so wanted a girl. I was born by caesarian section and when she woke she must have been in so much pain. And then disappointed to see I was a boy.

I know she loved me profoundly; but I also have this distinct memory of birthdays never ben quite right somehow. Of a sense of disappointment being profoundly attached to them.

So I’ve never been very good at celebrating them.

But this event was very lovely.

They were all lovely, and enjoyed each others’ company, and I enjoyed them also.

My eldest daughter was so wonderful and helpful, and my younger posted this beautiful Tweet:
 
@catreeowner
Catriona Innes
It's Father's Day soon but instead of celebrating that we are celebrating 1 year since my Dad got her gender recognition certificate. #proud

I felt then, and feel now, so deeply blessed.

Last Saturday was the most extraordinary day.

In the morning I went for the readthrough of my new version of The Cherry Orchard. It’s for Theatre Alba, who I worked with last year, and it was a pleasure to gather in the Scottish Storytelling Centre with so many friends

it’s a massive work, emotionally; I think Charlie, the director, wants to lodge it in the actors’ imaginations at an early stage.

I was pleased with my work: a few errors aside, it’s very sound. The right length and everything.

I had to leave right afterwards to go and see my Anna Karenina at Dundee Rep. I told everyone I was off, on the railways, to see another part of Russia.

Which I was: and which gave me so much pride and pleasure.

A really good house for a matinee; and a real change in the performance, too. The actors totally at home in the play now, completely firm in it, and so able to invest it with a new confidence and pleasure.

I was less tense, too, and so able to appreciate the work better. It moved me profoundly.

Some one I had never met before came up to me in the interval and fervently shook my hand. He said it was one of the best pieces of theatre he had ever seen. Tears in his eyes.

Such tributes mean so much.

I was working on the book of God’s New Frock on the train. The aim is to expand it and Jesus Queen of Heaven into a single book of about two hundred pages and God’s New Frock is almost there.

I realised I should probably also been working on my Tree of Knowledge which open at the Traverse later this year. it’s about time to start the rewrites.

Work seems to be pouring out of me. In fits and starts, it’s true, and with the usual frustrating blocks and breaks. But coming out with an urgency and pressure that must be connected, I guess, with the profound urgency of the political crisis we are living through.

And which so few people seem to have any awareness of at all.

A deep sense of urgency: so important to try to shine a light.

My version of THE CHERRY ORCHARD to open this Festival Fringe

I realise I’ve fallen in love. With Chekhov. I used to loathe him. All those well-bred Englishmen being languid in white linen. It enraged me.

He felt like a roadblock in the way of new work. And by new work I meant my own. I’d have been happy to ban him.

For some reason the one I loathed the most was "The Cherry Orchard". Those stupid stupid people. I walked out of a highly praised German production in the Festival once. It struck me as so self-indulgent as to be grotesque.

But I’ve just done a new version of it and I understand.

(I used to hate “Versions” too. What I mean is I’ve got to know the play through two or three translations, connected with the characters, lived their lives, and listened to their words)

Theatre is such a messy business one can’t really talk of perfection but in its dialogue (not a word out of place), in its construction (every element tightly hanging together) and in its ruthless compassion (which makes you laugh and cry at the same time) this amazing play gets closer to it than almost any other I’ve ever known.

When Chekhov wrote it he must have known that the feudal society in which he lived was utterly inadequate to the industrial world. That Russia was about to undergo cataclysmic change: and the urgency of this is present in every line.

There has to be a generalised sense of this in us, also, though we are utterly unwilling to recognise it, and this must be one reason why Chekhov speaks so strongly to us.

I know it is why he speaks so strongly to me; and why I have been connecting so passionately with the script.

The Company I’m writing for, Theatre Alba, are outsiders in every sense of the world. They’ve been putting on shows in th garden of Duddingston village manse for years and years.

I saw one of their first shows way back in 1981, soon after I started writing theatre reviews for The Scotsman. It was an intensely beautiful play called "The Shepherd Beguiled" (written by a forgotten playwright called Netta Blair Reid) and they performed with profoundly moving conviction in a disused cinema in Abbeyhill. It was one of the very best things I have ever seen and I remember walking home, high above the city, in a state of the profoundest joy.

The Company is still led by its founder/director, a charismatic and deeply gifted loner called Charles Nowoskielski, who has gathered around him a group of skilled and devoted actors, some of whom have worked with him since the company began.

They rehearse and perform out of doors in the same beautiful spot just beside Duddingston Loch and it’s this continuity and love for the work which gives it an extraordinary and deeply rooted kind of authority.

Last year I did a version of "The Seagull" for them. The setting was perfect, the acting superb, and the production achieved a profound level of beauty.

I felt intensely frustrated because half way through the run I discovered that somehow no-one in the Company had got round to telling the press... But hopefully this time around that will change.

Meantime I tell myself now, as I have to tell myself over and over again, that my job here is simply to write, and write as best I can. What people make of it is their business, and in the end not mine.

What counts for me is the opportunity to work with a writer as skilled and as wonderful as Chekhov. Who teaches me so much and gives me so much joy.

I have given two speeches in the past few days. The first one last week was to a group of National Health Service managers. They needed to see a living trans person to give meaning to the administrative work they do for gender equality.

So the meeting was mostly about legislation.

These things are very abstract, very dry, but putting them in a human context helps them make sense.

At one stage I spoke about my experience of being admitted to hospital as an emergency with a heart condition. It just so happened that I had gone through the process of changing the gender on my health service card a few weeks before: so when I got the identity wristband it said "F" after my name.

I was still in the relatively urges of transition, was quite unshaven, and being referred to as a woman and having my gender treated with respect made the hugest difference to me.

A woman rushed up to me afterwards and said she worked in the NHS card division and had been responsible for introducing the procedure that allowed patients to change the gender on their card and how happy and excited what I said made her feel. She was going to rush back, she said, and tell all her colleagues.

I don't know if what i said yesterday had quite the same impact. I hope it did. I was speaking to a group of mostly first year students at the Royal Scottish Academy of Music and Drama. Not really about gender issues at all: about my ideas of theatre and what I try to achieve in my work in it.

But being a transwoman mattered greatly if only because in simply being myself I was also trying to communicate that, yes, we do exist, and can be so proud of who we are.

It was in the same theatre in the building, the Chandler Studio, where my "Great Expectations" opened in 1988. I was living as "John" then, and so painfully shy.