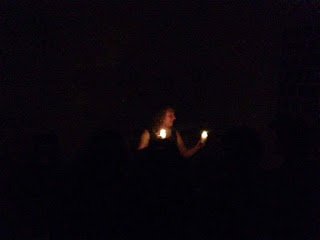 These are such dangerous times.

More than ever I sense that our planet’s life is on a knife edge, somehow; and in these circumstances what we say and what we do really matters.

We have to stand up to be counted. We have to make sure, as best we can, that we are part of the process of creating the new.

That we are not complicit in the process of destruction.

We’re also all a mixture of everything, of course, and in the end that judgement is not ours to make.

We can only try to do what we can.

And part of that process needs to be to reflect on where we are now, and what in the last twelve months we have done.

The last twelves months of what, in spite of everything, I refuse to see as a disastrous year.

I’m thinking of a young trans woman I met in Brazil who was telling me, tears in her eyes, of the difference my “Jesus Queen Of Heaven” has made to her and her sisters.

Of the fact that the Brazilian production of the play has finally given her the chance to work in the theatre. Something which the implacable prejudice of her society had up to then denied her.

I think of the woman I met after performing the show in Belo Horizonte. She had taken a break from occupying the Culture Ministry to see the show, she told me, and I had renewed her inspiration and will to resist.

I think of the homeless choir member I met in Rio who was often trembling uncontrollably because of her chronic alcoholism but who, on the day we performed together, just couldn’t stop smiling.

And the beauty and hope and resistance in those voices I don’t think I’ll ever forget.

I know it’s not not true now, what is often said, that art makes no difference to anything.

It does matter, and I was right all along to know that it did, and that artists bear a heavy weight of responsibility for the consequences, good or evil, of what we create.

And I was right all along to write “War In America” and foresee the disintegration of parliamentary democracy. To understand all those years ago that when the Berlin Wall fell it was not just about the collapse of communism but the collapse of capitalism too.

I was right, too, to insist on dramatising my grief in “Every One” so we could all begin the painful necessary process of looking at Sister Death.

I never knew any of that at the time, of course, I just thought it was me being silly.

But I know now it was more than that; because I saw “Every One” being performed so beautifully in Chris Goode’s production at the Battersea Arts Centre; and because next year the Attic Collective are performing “War In America” in Edinburgh’s old Royal High School and, for the first time on twenty years, I read the play.

And that taught me,too, that my impulse to create a cycle of five plays looking at the world’s profound and revolutionary changing was a good one.

That having written the first two, “Light In The Village’ and “War In America” I could write the third for Manchester’s Royal Exchange.

And what a joy it is to feel it slowly taking shape in my imagination.

A joy, too, to be beginning rehearsals next week with Graeae and the Exchange for my “House of Bernarda Alba” and to know, too, that my new version of this will help them in their struggle to right the discrimination and injustice suffered by disabled people in the theatre.

I’m aware, too, that all this is happening in the context of other personal struggles.

The struggle against the heart disease that made me collapse on stage in Belo Horizonte.

The struggle to recover and learn to walk again with my new hip.

The struggle against all the self-doubt and self-hatred, amongst so much else, standing in the way of my “Eve”. That I will perform next August, in the Traverse, for the National Theatre of Scotland.

The struggle to keep hope in the face of so much folly and greed and cruelty.

This year I’ve been called a “demon” and “a source of justified offence” and who knows what else besides.

From family, from my new sisters, from colleagues and from friends and from perfect strangers.

“Remember kindness”, someone says in one of my plays, “It’s kindness that drives away all fear.”

Singing with just one voice 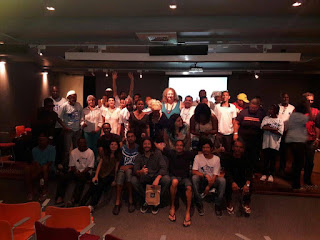 We met in the library.

Me and Elizabeth Miguel, who used to be a ballet dancer, and who still shows flashes of her former artistry in the way she stands and sits.

Me and Marcelino Oliveira, a man of immense dignity and charm who gave me a beautiful pendant he had made.

Me and Ana Rosa, whose misfortunes were so overpowering she could not speak. But whose blank, closed in face would sometimes break into the most dazzling smiles.

Me and Adressa Sampaio, a beautiful young trans woman who looked out with defiant and wary eyes at the dangerous world she inhabits.

Me and Valéria Viera Coelho, who always insisted on helping me up the steps to the stage.

Me and José Martin who dressed like a Robin Hood bandit from the arid northeast in his magnificent cangaceiro hat.

Me and Ivan Marik who came from the United States and had fallen on intolerably hard times.

Me and Palmira Vasconcelos Xavier, who always look a bit angry, and whose alcoholism meant it was very hard for her to stop shaking, but who insisted, absolutely, on being in a photo with me, smiling broadly the way she did throughout the whole day we were performing together.

And Vera Lúcia da Silva, who prefers to be called Lúcia, a tiny white hair old lady with such elegance in her demeanour.

And Suzete, with the figure and joyful smile of an impossibly fragile child.

And Anderson, who could not read or write and who in his illness and deep suffering seemed to have lost all his other names. A big, shambling man who when he sang lit up like a beacon.

And who, when I said "The first shall be last and the last, first" knew exactly what I meant.

And so many more besides.

Not forgetting Rico Branco, the beautiful, compassionate and charismatic choir leader who somehow managed to induce all these fragile people into one voice with so beautiful a song.

And I say the names because the names matter. The names of these remarkable individuals so profoundly hurt by so callous a society who still somehow, are able to raise their voices in song.

I don't know enough about how they survive in the homeless shelter and in the streets of Rio de Janeiro. I know that when they sing they touch the wellsprings of my heart.

And I am so proud of the event we created together.

The beautiful library in which they rehearse is threatened with closure, and so is the meagre safety net which sustains them. Capitalism here in Brazil and elsewhere is at its most cruel and inhumane.

“Bless you who persecute us, too”, Queen Jesus said, “because hatred is the only thing they have.

And it doesn’t amount to much. And they will lose it in the end.

Because no matter what they say or what they do they cannot stop the change that is coming.

And one day we will all be free”.

“Freedom”, the choir sing, in spite of everything, “Freedom” with open hearts….

And freedom becomes a palpable presence with all of us here in the City Of God.