me and my new knee 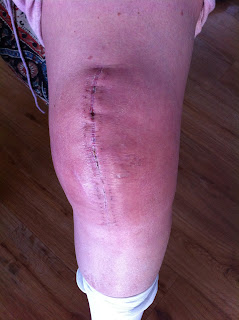 We call her Briony.

She’s not a thing of beauty, I don’t suppose, poor thing, being so swollen and discoloured, but remarkable nonetheless.

Especially when you look at her from the inside. 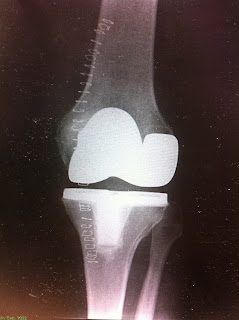 Even though i saw it happen I still find it hard to believe.

That a surgeon and his team were able to cut open my knee from top to bottom. Carefully move to one side all the blood vessels and muscles and nerves and who knows what else until they got to the bone. 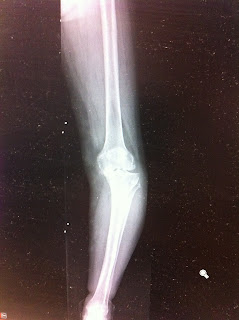 And then attacked it with drills and saws and I suppose sanding machines so they could replace it with this artificial creation, made of who knows what, glue it into place, I believe, and then ever so carefully replace all the bits of flesh they removed, sewing them up as they went, until they got to the final layer of skin. Which they held together with 33 staples.

You can see them on the picture.

They were taken out a week ago. By a cheery nurse in my GP’s surgery and we counted them all out, each one, as they went.

And the knee is swollen, as you can see, and warm to the touch, which you can’t, and in some places strangely numb. Ditto.

The numbness comes from peripheral nerve damage, they tell me, and the warmth from the quite astonishing processes of healing going on inside.

I help the healing as best I can with my twice daily walks and my four times a day exercises and the painkillers I need to keep taking, night and day.

It all takes up most of my energy and time, which is not surprising, given that it strikes me as astonishing that I can still walk at all.

And how remarkable it is that we can so quickly heal from such immense physical trauma, and that we so precisely know the exercises that will help us.

But how much harder it is to heal emotional pain.

The operation happened 19 days ago; and every day I can feel my knee getting stronger and stronger.

Meanwhile I still weep over the death of my partner 10 years ago; I still struggle with the problems associated with my gender identity. Which have been with me since the day i was born.

It must mean something, but I don’t know what.

All I can do is note this with astonishment.

And keep up with the exercises.

My new knee and me go home

So we’re home now, me and My New Left Knee.

She insists I take pain killers every four hours.

She demands I do her exercises four times a day.

She insists I take her for a walk every morning and afternoon.

She demands i wear white anti embolism stockings. Which is embarrassing as she has no fashion sense at all.

She insists I move about at least every hour or she gets painfully stiff.

She’s a bit like a jealous lover that demands attention every minute of the day and night.

And she really does take up most of my day; and in that sense my world has shrunk somewhat.

But in another sense it has grown enormous.

My movement in the outer world is painfully constricted; but, as if to compensate, my movement in my inner world feels infinite.

I keep thinking of the extraordinary co-operation I witnessed in the operating theatre, with this amazing, highly motivated and highly skilled team working together for my welfare.

Chris Goode, whose new show WEAKLINGS opens on Wednesday in the Warwick Arts Centre, says it reminds him of the co-operation he witnesses in our kind of theatre: highly skilled, highly motivated individuals working together to realise a shared vision that has emerged from him.

And I keep thinking too, and with deep gratitude and awed astonishment, of the healing powers of the human body.

Of the trauma my leg received last Wednesday, as they attacked it with electric saws, chisels, and hammers, and glued a new prosthetic knee onto the bone… which you’d imagine might finish off anything other than the most miraculous substance.

Substance we utterly take for granted: the human body that sustains us.

The human body that is the stuff we are made of.

Watching my knee being cracked open...

So there it was on the screen.

Maybe something like the knuckle end of a joint of pork? Do such things exist?
The skin looked a bit like pig skin, maybe

(I don’t often eat meat, so I couldn’t be sure)

But it definitely looked like something that had been beautifully prepared for a butcher’s shop.

No blood though. Because of the tourniquet.

There was a layer of fat that had been meticulously peeled back to expose the bone.

No sign of the other half of the leg, though, it was as if it had been cut off, and I was wondering vaguely what had happened to it when some hands came into the picture and set  to work with a hammer and chisel.

And I felt it. Absolutely no pain, but each time the hammer struck a kind of weird vibration of the bones.

Because this was my leg on the screen.

This was happening to me.

The earlier stages had all been a bit of an abstraction. A conscious effort to say: This happening to me. And then not quite believe it, because I could feel nothing.
It was as if my leg had become detached from the rest of me; as if that strangely disembodied object floating in the hyperspace of the computer screen had nothing to do with me at all.

Until I felt the hammer blows maybe in my stomach somewhere, not an unpleasant sensation,and that helped me understand this was also happening to me.

But it wasn’t horrible and it wasn’t frightening, it was more utterly absorbing and fascinating.

To be in the presence of a group of people co-operating so meticulously, so carefully, to make me better.

There had been a moment leading up to my heart surgery when the surgeon, who had been explaining the procedure, said “And at this moment I will give you an injection to stop your heart."

But that now, for the first time, we were able to stop a person’s heart beating in order to heal them.

And there I was, yesterday, watching this extraordinary event in which a team were working together with some very dangerous tools that in the past might well have been used to inflict grievous bodily harm… but again, doing it to heal.

Somehow it seemed to contradict the right wing notion that we are nothing but aggressive selfish animals working individually to exploit and cheat and do each other down and it filled me with hope.

And I was amazed, too, at the audacity as I watched them position the new knee joint with infinite care.

And there was the other half of my leg all of a sudden, and they proceeded to replace the flesh over the bone with infinite care.

The flesh looking white and strangely bloodless, because of the tourniquet.

So it really did look like a joint of roast pork.

And then they replaced the skin, which I’m sure would make very good crackling.

And then it was done: my skin, my flesh and bone, all taken apart and miraculously put together without any pain at all, and I was wheeled out to recover.

And so incredibly thankful and glad to have been able to witness this.

And even more glad that at last it’s been done:

So my poor old knee has a chance to get better again.