The pulpit Queen Jesus preached from this morning 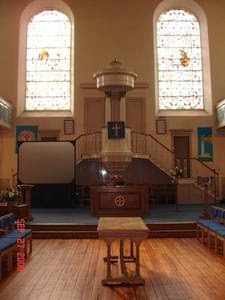 I preached here today. Or rather my trans* Jesus did: Jesus The Queen Of Heaven. Preaching in this bastion of apparent straightness.

Maybe I did it out of mischief. Certainly not the best place to communicate with people from.

But it felt like a good place to stand in and rail against the fact that so many of us are forced into prostitution. A good place to declare my personal pride in embodying "this so-called shame and this disgrace". A good place in which to remind the congregation that Jesus never condemned gay or trans*people. The people he condemned were the self-righteous: "those who condemn others and imagine themselves good".

And a good place, above all, to remind everyone that Jesus is Queer. "Always was. Always is. Always shall be. From now until the end of time".

I was there, at Broughton St.Mary's in Edinburgh, in a time when certain other congregations in the Church of Scotland have decided that their hostility to homosexuality is the most important thing about their Christian faith. But this congregation and their minister are determined to affirm their commitment to ending discrimination: and they invited me to affirm with them.

So I did the Queen Jesus sermon, and the story of the Prodigal Daughter, and blessed them all as part of their regular Sunday service.

And the congregation were lovely. They all wanted to hold hands for the blessing; they made me so very welcome; they made sure I had water to drink and a hymn book to sing from and that I was able to join them in communion.

I was so moved by their warmth. I had been nervous coming - still affected by the memories of the hatred expressed by Christians at my first performance, and by the fact that when I was young and forced to lived as a boy it was in church, above all, that I could never ever be myself.

So today brought healing for me; and a reminder, too, that change is coming in ways we could never have imagined. Not even in our wildest dreams.

What is to be done?

A major source of suffering for so many of us, I think, is that we can so often see disasters coming and, however much we may protest, seem helpless to prevent them.

The Iraq War for instance…

And the consequences of that disaster have been even worse than we imagined.

Dr. Lanyon in my DR JEKYLL AND MR HYDE suffers from this, and its attendant weariness and despair:

I foresaw the destruction of Bangladesh
Its one hundred and sixty million people being submerged under rising sea levels
I foresaw that the city of Sao Paulo would be destroyed by thirst
Its twenty million people deprived of drinking water
The riots. The chaos. The millions of deaths.

I was made aware of the situation in Bangladesh when I visited Dhaka way back in 1989. It has haunted me ever since.

The country exists at one of the mouths of the Ganges. It is very close to sea level and vulnerable to floods from the river because of the deforestation of the lower slopes of the Himalaya, where the river has its source.

At the same time climate change, the increased ferocity of the monsoon and of tropical storms, make it vulnerable to storm surges and flooding from the sea.

Especially because climate change is also causing a rise in global sea levels.

The outlook for this beautiful and densely populated country is incredibly bleak. Many of the people I spoke to at that tme knew this: but kept on working.

As Calderon says: even in the bleakest of situations, “the good you do is never lost”.

The threat to Sao Paulo is more immediate. Again, I never knew about it until I went there.

The city is running out of water. The largest reservoir is operating at 5.1% of its capacity: and this lessens with every passing day.

Climate change is causing drastic drought in the South eastern region of Brazil; and the privatised water companies have done very little to reduce leaks in their pipelines or engage in long term planning. Instead they have been more concerned with paying dividends to their shareholders.

And this may be why we have heard so little of this crisis. It contradicts the prevuing orthodoxies of those who govern the world’s media: who want to deny the existence of climate change and assert that privatisation is the best way forward for public utilities.

It is compounded by the fact that 95% of industries, offices, hospitals and enterprises in the city have no contingency plans to deal with the water shortage.

100% of hospitals have no contingency plans at all.

The authorities are remaining tight lipped about what measures they will take. But it seems increasingly likely that they will have to cut off the city’s water supply for 5 days out of every 7.

In summer time, when temperatures are reaching 40 degrees.

As I write this, the magnitude of it all so tempts me into the general state of denial.

Surely this cannot be happening?

And I so wish I had made it up.

But I didn’t. Some things are too appalling to invent.


All I can do is write a play that, among other things, tries to warn.