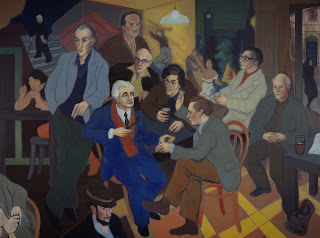 Four years ago, the NTS asked me to write a monologue inspired by a picture in the Scottish National Portrait Gallery.

I chose this - 'Poet's Pub' by Alexander Moffat - and I gave voice to the faceless woman sitting on the left hand side.

A dear friend has aksed to read it because she says it sounds important still.

Nothing dear about you Scotland. You vile country.

You with your cold dark days.

You with your rain that stings my face

You with your hard grey streets, your dirty windows

You with your niggardly closed off minds.

You with your instinct to cut everyone down to size

You who find it so hard to praise anyone or anything.

You who always want to fail

Because you’re frightened of succeeding.

So you can blame someone else for it.

I hate you Scotland.

I hate your poets.

Look at them. So-called alpha males.

Look at the way they toady up to that old man

Or say vile things about him behind his back

That old man with his filthy pipe and his tartan scarf

Praising Lenin and the power of the people

And them in their pecking order all about him.

Look at them. Bunch of pricks.

Not that their pricks are up to much.

I know because I’ve had most of them inside me,

Waggling about or pumping up and down

And then me afterwards smiling saying you were wonderful

It was a skill I had.

And they all loved me for it, and the way I moaned

To show that I’m available.

But then see how it’s also kind of hidden that I’m naked because that. dear Scotland,

Kind of furtive and ashamed, and the way you feel about feelings too.

Why you will keep drinking just to blank them out.

You’ve blanked us out too, dear Scotland, kept us at the edge of things

Me and Liberté and Jenny in the courtyard

Not even bothered to paint our faces and denied us names.

And that’s Jenny in the courtyard.

And I’m Stella and I belong in the stars.

Jenny’s dead now. She worked the streets to support her child

And she was a better human being than the whole lot of you.

You with your fine words and your frightened hearts.

You’d have used her for your furtive pleasures only she made you pay.

But me I gave it you for nothing.

I let myself be used.

Don’t judge me for that, Scotland, because you’re the same.

You’ve made yourself available

You’ve let yourself be colonised.

And then you believe them, Scotland, when they tell you you’re no good

And can’t be trusted to run your own affairs.

That’s why the Scotland I lived in was so very small.

Why I’m the same, Scotland, the same as you

Why I let myself be despoiled

Why I wrote my poems in the darkness

And never let them come to light.

That’s why I drank myself to death.

But it doesn’t have to be this way

Don’t believe them when they tell you so

the squalor of alcohol

the resigned and twisted bitterness

That’s not for you.

When he said poetry should be at the centre of your life.

I loved him once. I loved them all.

Maybe I’d say they should be at the beating heart of things.

Whatever. I won’t argue.

But don’t leave me at the edge, Scotland.

And don’t deny my name. Acknowledge me.

I don’t mind being naked. I refuse to be ashamed.

But right now, Scotland, when school children notice that I have no clothes

They get hurried on.

You see, Scotland, you’re still so prudish when it comes to sex.

But your children should be fearless, unashamed.

Don’t believe them when they tell you they cannot help committing crimes.

They’re wrong. They’re very wrong. There is another way.

I was gifted, Scotland.

I was different, Scotland.

I laughed. I danced

I loved my body and I loved to live.

Yet I destroyed myself because there was no place for me.

So I drank myself stupid and I felt ashamed.

Don’t be ashamed to be women

Don’t be ashamed to be men

Listen to those of us who don’t fit in. Cherish your outcasts.

Because on that day, Scotland,

That day you’ll build the road to freedom.

That day freedom will be at the centre of your picture

And the face she’ll wear will be your own.