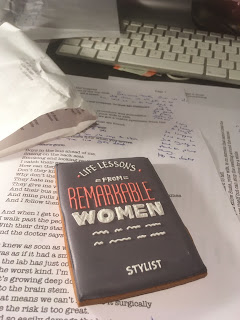 When I got off the train from being with my grand daughter, this was waiting for mw at home.

It's not a book. It's a cake. Someone from the publisher's publicity department thought it would be a good idea to send one to all the authors whose essays are published in the anthology.

Someone's put a lot of work into it, I imagine, and i couldn't deal with it somehow.

It's all a bit too much for me.

And I don't understand what it's for. All that time and skill and money...

I must stop worrying about it. That's obvious.

And tomorrow when a dear friend comes round, we'll just eat it.