My life lesson's in here 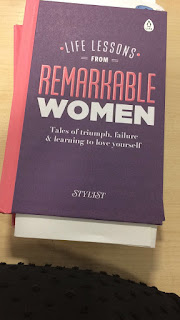 It was as if I wasn't properly human, somehow.

I hate the expression "non-binary" but I know it accurately describes me and so I suppose in a society that still basically insists there are only two genders I still don't really belong anywhere.

But at the same time I know that living as a woman really suits me, even if it doesn't altogether describe me and that it's because I live as a woman that I now feel so comfortable in my own skin.

And I guess that's an extra reason for being happy I have a piece published in this anthology that came out on March 1st.

It's nice to be thought of as a "Remarkable Woman" and remarkable and miraculous, somehow, that after all that's happened, and all that could have happened, I'm still here to give life lessons to anyone at all.

But here I am. And for me, anyway, that's a cause for celebration....