Finishing the play. And why it matters. 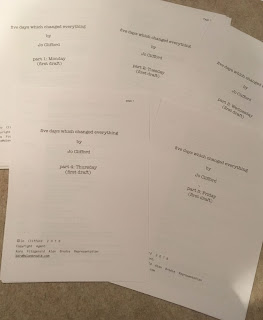 I've just finished printing out these five short plays. I finished the last of them this evening, just five minutes before a dear friend came to tea.

And next week I will hand them in.

I'm not quite ready to celebrate: I haven't read them yet.

They're a serial, each of them 15 minutes long. I'm proud because I've written in that form before.

Proud because they're the first new plays I've written for a while; and by the end of last year I was too ill to write anything.

I wrote three of them this week. Parts three and four I'd finished by Wednesday. Part five I got stuck on.

I was so distressed by events in the world yesterday that I found it so hard to focus on anything. And I'd made a mistake somewhere.

It's a brutal process, this: make a mistake, take a wrong turning, the words won't come and you're liable to feel stuck forever.

I had a singing lesson yesterday at 4.30 and suddenly half way through a song I understood where I'd go wrong.

And by the time I'd arrived at the Filmhouse to see "A Fantastic Woman" I knew exactly what I had to do. I had to print everything out, go back to the very beginning, and rewrite everything. That way I'd know what had to be in Part Five.

So I turned on the computer this morning before I'd even had my cup of tea to get the printing started.

Part Five was still open. And the minute I saw the first speech I knew it had to go. And that somehow freed everything else and I started writing and never got out of my pyjamas till after two.

And there was just one long speech to do. And I did it late in the afternoon.

In the middle of it all there's been one of those Facebook debates going on, inspired by my blog post of I don't know what day any more about whether the Russians did or did not try to kill those two individuals in Salisbury and what it all means...

And this all frightens me. And yet I kept writing. I cooked a lovely meal for my friend. And I feel that's important somehow. That even in perhaps the smallest of ways it's an act of resistance that matters: not to be carried away by fear or by rage but to do what we can to be creative and hospitable and kind.