EVE comes to the Glasgow Citizens'. Or: A dream I never had comes true... 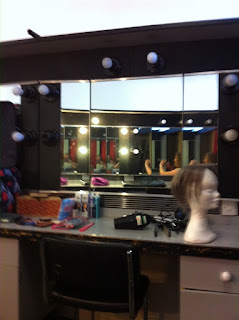 I’m sitting in my dressing room in the Glasgow Citizens’ Theatre.

I never thought I’d ever write such a sentence.

But I just have: and I’ll be on stage soon.

And I’m looking in the mirror and remembering the first Citz show that I ever saw.

It was TAMBURLAINE THE GREAT in the Church of Scotland Assembly Hall in August 1972. Me and Susie had only recently begun to be able to make love together. We’d just come back from a mad journey to Zaragoza. We had such little money and we’d spent it on tickets for this show and the first thing we saw was this beautiful half-naked painted young man standing by the statue of John Knox breathing fire.

I remember him and I remember Bajazet in his cage and the rest of the show is a confused memory of incredible colour and intense beauty and horrible cruelty.

Cruelty that was part of the beauty somehow and most of all this fabulous intensity to everything that I had never experienced in a theatre before.

I fell in love with it though it terrified me too and not long afterwards we would regularly pile into our battered car and drive across to Glasgow to see their productions from our commune in Fife.

And talk about them so intensely on the journey home afterwards. Some of the things I saw at that time made me angrier than anything I’ve seen before or since. And sometimes there’d be something so beautiful…

I remember a moment in MARY STUART when Mary is about to meet Elizabeth and the huge black drapes slowly fell off the theatre walls and I have never seen anything lovelier….

Whatever it was so strongly drew me there was all a bit of a mystery to me at the time, . It wasn’t that I was consciously preparing myself to be a playwright because at that time I never knew I was such a thing.

And performing again was completely impossible. The idea never even crossed my mind. I was still so deeply hurt. I still thought that if anyone apart from Susie knew about me I would die of shame.

And as far as I knew I was still a novelist. And a consistently failing one, too.

Looking back it’s obvious that I kept failing to write novels because I wasn’t a novelist, I never was, and had just completely misunderstood myself.

And then when I stumbled into writing plays I never for a moment considered myself an actor. It wasn’t till the early two thousands that the ridiculous idea even began to occur to me that I could maybe perform.

“Something else I got wrong”, I think, as I look in my dressing room mirror.

It’s the first time I’ve done a show on a nineteenth century proscenium arch stage. I’m intensely curious about it.

The theatre was built in 1878 and designed by a unsung genius called Campbell Douglas. He pulled off that miracle the best of these old theatres can achieve: of being large and public and intimate at the same time. Sit in the stalls and what’s on stage looks so imposing; stand on the stage and you feel you can reach out and touch people.

None of which makes it easy. The rake is not kind on my arthritic knees and ankles and hips: the invisible slope of the stage is so steep I can barely walk.  And I can’t place my voice in the acoustic somehow. I don’t feel any connection anywhere.

But this is a powerful place. That’s for sure. It’s a kind of machine that in one sense I’m just a cog in. And it’ll be pitiless if I let myself be dominated by fear.

And the thought comes that really it’s so very ridiculous to try to transfer a show that’s established itself so firmly in the three sided intimacy of Traverse 2 into the 500 seater bigness of a place like this… and with that thought I stop judging myself and set myself free to explore.

Performing the show in a big public space like the Citz brings out new dimensions of meaning. Political dimensions me and Chris Goode always meant to be there, because this is the space for which we originally wrote it.

I can’t write about them now, because I’m still trying to understand the possibilities this new, amazing, miraculous and beautiful space allows me.

At one stage in the show I tell my younger self: “And all those dreams you had which seemed so impossible have all come true”.

And the strange thing is that I can’t say that performing in the Citz is a dream come true. It was so impossible that I never even dared dream it.

But here it is. And what will happen?