White Ted, two travestis, and The Gospel According to Jesus Queen Of Heaven in Sao Paulo 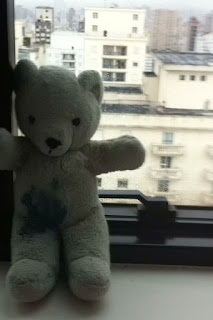 White Ted came into my life soon after my partner died.

I was visiting my daughter and she said, “Dad, you need White Ted”.

And she said “I’ve got Theodora”.

And she had her lovely man too who was even better than her big brown teddy bear and so I took White Ted home with me, feeling all the more touched because I had never in my life had a teddy Bear.

My father didn’t want to me to have one, I think because he knew he had so badly wanted to have a girl and so was all the more determined I grew up a man.

And Teddy Bears were too soft for boys.

My upbringing bore a remarkable resemblance to what is now known as “reparative therapy” - a means of supposedly “curing” young trans children and making them grow up in the  biological gender to which they were assigned at birth.

The most important aspect of this particularly horrible form of abuse consists in making sure its victim is kept strictly isolated from everything that could be remotely considered ‘girlish” and raised in surroundings that are rigidly masculine.

A teddy bear was apparently not masculine enough; which was why when I eventually met him in my mid fifties White Ted filled a need I didn’t even know was there.

And he’s with me here in Sao Paulo because he goes with me everywhere.

And among many other things he’s a kind of symbol of my gender non-conformity, which makes his presence here very important with me as I have come to see my play “The Gospel According To jesus Queen Of Heaven” performed in Portuguese by Renata Carvalho.

One of the many things I love about Renata is that she so publicly identifies as ‘travesti’.

Years ago, when Susie was dying of the brain tumour, i remember speaking at a Playwrights’ conference and when asked to identify myself said

“I”m not a male writer and I’m not a female writer. I’m a transgendered writer”.

And looking back I can see so clearly how somehow my state of exhaustion and grief opened me up to a profound truth about myself.

I had to use the word “transgendered’ because there was no other.

But it doesn’t truly express who I am, because I don’t believe I’ve ever been in a state of transition from ‘male’ to ‘female’.

Some of us can see very clearly that our original ‘maleness’ was terrible mistake, and that we always were truly ‘female’.

But I could never do that. I just knew I was not a man.

But then who was I? I never really knew.

I accepted the label “transgender” because when I was young there were absolutely no names for someone like myself. No names at all.

I was somehow unspeakable.

And ,believe me, almost any word is better than none.

So I’ve made do with it.

But what a joy, somehow, to come across an interview Renata gave last week when she, too, said

And so how wonderful that we are working together on this play.

I am seeing the show tonight for the very first time.