trying to keep the light shining 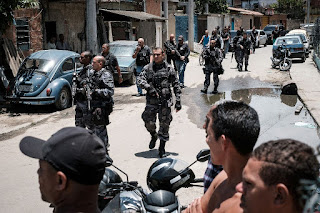 Terrible things are happening in the City of God.

There was a police raid on the favela last Saturday which led to a firefight.

Later that morning, a police helicopter crashed nearby, killing all the crew.

Following that, police intensified what are euphemistically known as their ‘operations’.

As a result of that, young men started to disappear from their homes on Saturday night.

And then on Sunday morning, distraught families searching the overgrown areas of wasteland in and around the community recovered the bodies of 7 young men, some bearing signs of torture, which they placed in the town square.

Following that, the Police sealed off all access to the favela, preventing people going to and from their work.

And following that, the police announced that their ‘operation’ would continue indefinitely.

Only the week before, I had been a judge at the World Slam competition, and the Brazilian poet won, and the whole amazing and unique Book Festival that is FLUPP closed with music and dancing and with joy and hope and celebration.

And the day before that, I’d been performing QUEEN JESUS there.

But the hope and the possibility for a better world that all that represented…. feels as if it has been snuffed out.

So I’m left, like so many of us, feeling helpless.

Asking myself what is the point of putting on a white dress and climbing up onto a stage and pretending to be Queen Jesus.

It does feel a little as if it's a waste of time.

But then it’s not as if this blatant cruelty and injustice has just been invented.

It’s not as if it’s a new thing for our economic and political structures to be breaking down; or for those who benefit from them to be resorting to brute force to defend their interests.

This madness, this violence, this self-destructive folly and injustice has been present all my life.

It’s just that the self-protective bubble I used to protect myself has burst; and now, with wide open eyes, I have to look out at the state of the world.

And my fear, my anger and my disgust will not make it go away.

So if I ask myself what I should do the answer is actually still the same.

However ridiculous or futile or absurd it seems, I have to go on speaking the truth as I see it.

Trump and the Brexiters may go on deluding themselves with their talk of walls but no matter what they say or what they do they cannot stop the change that is coming.

They and we have no choice but to acknowledge that we all belong to the one world and we are all in this together.

And we have to act on this knowledge.

So it’s important to dedicate the work to those young men who died so horribly in the wasteland, and also, hard as it is, to those military policemen who died in the helicopter.

For one day we will come to know we are all one people in the end.