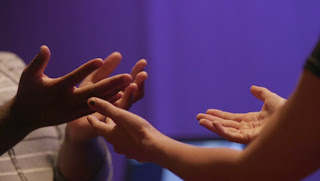 Last week I experienced an empathy machine. The Machine To Be Another uses virtual reality techniques to enable you to begin to see the world through another person's eyes.

At FLUPP, the literary festival that was this year in the City Of God, we were invited to experience the world through the eyes of the parents of young black men who had been murdered by the police.

So when she held the photograph of her dead son, i held it too.

He was such a gifted child, I heard myself saying, he loved life and he loved his family.

And for his birthday he loved chocolate cake.

And now I'm holding a piece of the cake, and I'm eating it, and it feels sticky and it tastes sweet.

And if I understand her correctly, she was sure he wasn't involved in drugs, he loved football too much....

And I find myself standing in one of the alleyways of the favela, looking at a memorial to him and to his friends, all killed on the same day.

And then it was over, and someone took the ead set off, and there i was, blinking a little in disbelief, back in the tent of the City Of God schoolyard, and smiling at the kind faces of the performer and technician who had been there with me.

The sound track was created from interviews with the mother concerned, using her voice, and the images were filmed in her own home.

It's a remarkable and beautiful idea, developed by an idealistic group dedicated to using technology to develop human empathy on a world wide scale.

it's been developed in an extraordinary arts/techno lab in Barcelona

And this November alone ahs been travelling to Bogota and Delhi as well as Rio de Janeiro.

It seems obvious this has huge potential as a tool for conflict resolution.

And how would it be, I wonder, if it allowed government ministers to understand the experienc of those whose lives have been destroyed by benefit curbs...

Or what would happen if those victims were able to see the world through the eyes of the individuals who are implementing them?

Or if the parents of the murdered children were able to see the world through the eyes of the frightened and damaged human who did the killing?

Would that be possible?

And - of course - I find myself longing to write scripts for it....

The young man who developed the project in Rio attended one of the rehearsals  of Queen Jesus with the homeless choir came away with tears in his eyes...

And his machine is so needed everywhere just now.

So needed in the USA, as more and more anguished voices in that hate-filled nation are beginning to understand

Everywhere in this increasingly hate-filled world.

I have been so dismayed to the reactions to the death of Fidel Castro.

Those who were praising his achievements as a revolutionary leader hating and being hated by who who want to condemn him as a vicious homophobe who imprisoned LGBT people in internment camps.

But it should be possible, it really should, to understand Castro as a complex, flawed human being who, like all of us, did good and evil in the world.

And it should be possible for us to respect the fact that we will all have different views about him.

We need to be able to empathise with each other even in these small things.

Never mind the really big ones.

As for me, I had to leave the machine to go on stage to do what I could to promote empathy and fellow feeling and compassion.

In a much older empathy machine called the theatre....