Sacred theatre in a private space 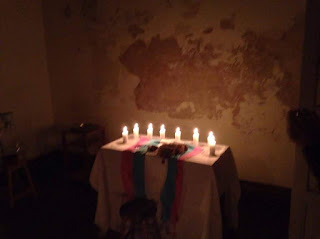 What is happening in the world is a nightmare.

It’s no consolation that I saw it coming. I remember writing when I set up my website some time in the nineties that our democratic institutions were plainly inadequate for the massive changes confronting the world.

The UK votes for Brexit; the US votes for Trump. As Noam Chomsky says, it is extraordinary that we should choose so clearly to accelerate our self destruction.

All I can do in the face of all this is keep making theatre.

Creating it every way I can.

On November 6th I was invited to perform JESUS QUEEN OF HEAVEN in a private house.

I said yes because I wanted to experiment. I wanted to see if it was possible to turn up at an unknown space late in the afternoon, arrive with empty hands, and perform the show to an audience that night.

It was a theatre producer who invited me to do it in his wife’s family’s house.

An old house, by Sao Paulo standards, I’d guess dating from the 1920’s, built by a Lebanese immigrant to Brazil who wanted somewhere big enough to bring his family over.

In the last few years it’s fallen into disuse, and my friend is slowly beginning to reclaim it.

I’d asked him to provide bread and wine and candles; suggested a fee which he undertook to collect from his guests. Which he did; and before I left for my hotel gave me at least double in notes in an old cardboard box.

The room I was to perform in was big enough to seat 27 people crammed together and with just enough space for a small table to serve as an altar, two wooden boxes to put candles on, and a desk lamp in each corner.

It was lit by two old desk lamps, which I found somewhere, the rather gorgeous light fitting in the centre of the room, and the candles which I’d asked my friend to supply.

I poured the wine into plastic shot glasses which I placed on a tray, found a white table cloth for the altar, and used my rainbow scarf to wrap the bread in.

It couldn’t have been simpler. And it worked.

I won’t forget those 27 faces lit by candlelight, all focussed so intently on trying to understand a foreign language, some with tears rolling down their cheeks…

This was sacred theatre.

And it strengthens me, somehow, to know it can be done. That it can work artistically and economically.

Because, faced with the hatred that surrounds us,  a theatre based on compassion and empathy may be the most effective weapon that we have.

And we need to keep finding ways to create it.