Queen Jesus in Belfast and the City of God 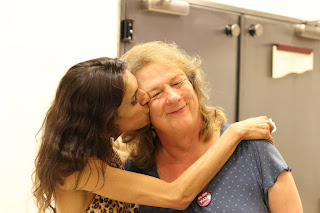 Renata Carvalho is a force of nature in THE GOSPEL ACCORDING TO JESUS QUEEN OF HEAVEN.

She is subversive, revolutionary - and also theologically orthodox.

Her name means ‘born again’. Which is exactly how she is: having left her male identity behind, she has been reborn in her true self.

And Jesus tells us we must all do that: that we must be reborn again to enter the Queendom of Heaven.

The church teaches us that when God came down to earth She did not take the form of the powerful or the priestly or the rich, but instead the form of the oppressed and the poor.

And so now it would make absolute sense for her to take the form of a travesti - for so long considered the dregs of Brazilian society, associated with prostitution, drug taking and early death.

A group of people still denied access to education, health care, housing, gainful employment, and even to their own names.

She brings to the part all the anguish and rage associated with her identity; but also the courage, the energy, and the ferocious wit all incarnate in the fascinating, powerful, authoritative, charismatic and extraordinarily beautiful being that she is on stage.

It’s a total joy to watch her; partly because her interpretation is so radically different from mine in so many ways, and yet is also so rigorously faithful both to the text and the essential spirit of the play.

And I’m so happy with the incredible success the play has enjoyed in Londrina and Sao Paulo - every performance sold out, a waiting list of people waiting for returns, unanimous and high profile critical acclaim.

Not to mention the interviews and the profiles in websites and the straight press. I think this may be the first time a travesti has received such due recognition as a serious and accomplished theatre artist.

And this is having an effect on the fierce and ongoing debate about trans rights in Brazil.

Yesterday I was talking to a gifted and beautiful young travesti who was telling me, with tears in her eyes, of how much the play means to her and her sisters. Of how it has given them encouragement and hope.

And that’s the thing that makes me proudest of all.

Tomorrow and Saturday Renata performs the play in the Outburst Arts Festival.

I can’t imagine the impact the work will have on Belfast audiences. But I hope this will be the first of many invitations for her to perform in Europe.

While she performs in Northern Ireland, I will be performing in Brazil. I will be at FLUPP: at the Literary Festival of the Peripheries.

This is a remarkable institution: a book festival that takes place in the slums of Rio de Janeiro. This year it is happening in the favela of the Cidade de Deus. The City of God…

I am collaborating with  Uma Só Voz (with one voice), a choir whose members are all homeless or live in dire poverty. Together we are going to use parts of the text and their song to create new liturgy of defiance and of hope.

So the work goes on across continents:

All of us here to love and to be loved.