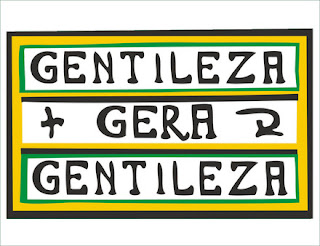 We were travelling through an endless dreary underpass in the port area of Rio de Janeiro.

It was the usual hellish, frightening and repulsive kind of place where you often see the makeshift encampments of the homeless.

But even they seemed to have been cleared away, and there was no human presence to relieve the dismal monotony.

Until I began to notice the panels. 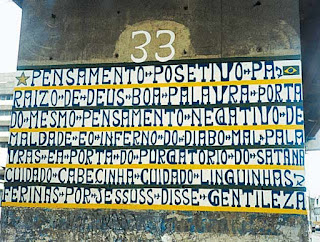 There they were, in their remarkable lettering, painted on each of the pillars of the flyover.

Impossible to read what they said, as our taxi sped past, trying to escape this accursed place as quickly as possible, but one word kept standing out:

And it was such a strange message to find in such harsh surroundings.

Apparently they were painted by a man who lived on the streets who came to be known as O Profeta Gentileza. A tall emaciated man with a long white beard who wore a white robe and who, when he wasn’t painting the fifty six pillars of the flyover, walked the streets all over the city carrying his message on a placard in one hand and flowers in the other.

There’s something very inspiring and something very futile and sad about this man painting his thoughts over flyover pillars where they could never be read.

And after his death in 1996, with his artworks becoming increasingly damaged and vandalised, the town council decided to cover them in grey paint.

And so it looked as if they were gone.

But that wasn't the end of the story: they were missed, their absence was mourned, and after a massive public campaign the murals were restored.

And here they still are, in all their eccentric glory.

And a cynic might say that the traffic still roars by regardless.

When I despair about the future of theatre and its intractable problems as a labour intensive craft in a capital intensive economy, I feel my attempts to create beauty in this form are really futile.

About as futile as writing messages on a flyover.

But even as the cars race by, fleeing one appalling traffic jam and on their way to the next, at least a precarious trace of the prophet's vision remains.

A fragile hope and belief that things can be different.

I’ll remember this man with gratitude. But I won’t start painting messages of peace and love on motorways.