How a non-binary and trans Jesus came to be born 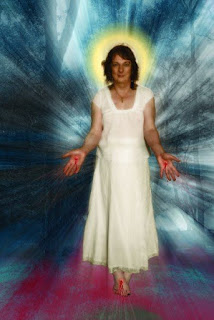 This picture was released by Glasgay! 7 years ago today.

I was hardly aware of it: I was in France at the time, on a writing fellowship. I’d just had my surgery.

I’d been turned down fro full gender reassignment surgery in 2007 because of my heart condition. I remember at the time being determined to live as I needed to anyway, in spite of all the abuse I was receiving on the street.

I’d been turned down by a surgeon in Thailand; I decided to get myself fit, put myself through the NHS system so that when I had the operation I would know that any necessary facilities would be close at hand.

So I went through all the humiliation of seeing the two psychiatrists and getting their approval, and when the referral to the surgeon finally came instead of feeling happy and excited I found myself feeling appalled.

I realised, very much to my dismay, that I neither wanted nor needed a surgically constructed vagina.

The female hormones I was taking were battling it out with the male hormones my body was producing. I realised I needed an end to the hormone warfare.

And the simplest way to achieve this was through an orchidectomy. Which is the polite word for castration.

And that’s what happened, 4 or 5 days before I was due to go to France.

The huge practical advantage of it was that I hardly had to wait; there was minimal risk of complications; and the recovery time was very quick.

Which is how it turned out. A week later I was able to ride a bike into the beautiful forest of Fontainebleau.

I wore no make-up, I’d probably hardly bothered to brush my hair. And I was wearing gender neutral clothes.

I passed through a village where a woman was working in her garden. She looked up at me, smiled, and said quite naturally, “Bonjour madame”.

And I knew something very profound had happened.

In the meantime my gifted friend Neil Montgomery (http://www.besite-productions.com/) had taken this beautiful picture.

I borrowed a white top and skirt from a dear friend and we took the photo in the basement garage.

Neil had brought lights, but he discovered that if I stood in front of the light that went on automatically every time a car came in he could get the effect he wanted.

So I would pose, and try to look loving and calm… and then the light would go out, and I’d have to wave my arms or jump up and down to get it on again, and often both.

The photo caused a lot of offence, and probably contributed to the hostile demonstrations that happened when I opened the play.

But that’s not what I’d intended. I was just looking for an image that was obviously Jesus; and obviously trans.

Not easy, as it happens. Men can do it with a robe and a beard. But not a trans woman.

I didn’t want to hang on a cross, because the play does not focus on suffering. So we went for an image of a resurrected Queen Jesus with her stigmata, which Neil realised quite brilliantly.

And there she is, and I’m proud of her. A non binary Jesus, I think, as well as a trans one.

7 years ago is hardly any time at all. But it feels like a lifetime.

And the whole trans debate has moved on so radically in the meantime.

As I so fearfully and nervously performed the show in that tiny theatre, it never occurred to me that I would still be performing now.

Or that a beautiful and gifted travesti actress would soon be giving the Brazilian premiere of the play in Portuguese.

When I performed in Belo Horizonte a viciously transphobic right wing government with links to evangelical churches had begun to claw back our (very limited) right to our real name.

And doing so in the name of Christ and the family.

So there was I, an openly trans father and grandmother performing a play about a trans Jesus which made it so clear that He would never support such loveless and antichristian prejudice.

Speaking the play’s words in that context made me profoundly aware of how much they matter. And I know Renata Carvalho will make them more urgent and immediate still.

And I also know that the pilgrimage of Queen Jesus has hardly begun.