Writng from Sao Paulo: the first steps in South America 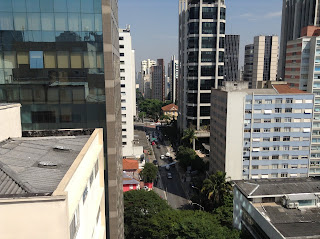 ….And this is how the play begins.

And this time, this place, early in the morning on the twelfth floor balcony of this huge and amazing city of Sao Paulo.

The towers are all around us, reaching up like plants growing in darkness, desperate for the light of the sky.  And I can hear the voices of boys playing football on the basketball court far far below us, and dogs barking and the shrill cry of unknown birds.

And all above the monstrous, endless roar of the traffic in this, the largest city of the whole of South America.

And me and my beautiful companions look at each other in wonder.

“This is where we met each other…”

And the meeting began days and weeks ago, before we ever left Scotland. Electronic meetings with the extraordinary women in Brazil who are organising our visit, and our physical meetings with each other as we try, a little ineffectually, to prepare ourselves for it.

But how can you prepare yourself for this….

The other electronic meeting was with Luiz Felipe Reis, an arts journalist from O Globo, that Wikipedia describes as one of the longest established and most widely read newspapers in Brazil.

I answer his questions as best I can not quite believing they will be published.

and discovering I am “one of the most important Scottish women dramatists and an icon of transgendered art” followed by translations of his questions and my answers:

"I am writing an article on plays that are inspired by Nora character, written by Ibsen, and about plays that focus on woman issues as abortion, patriarchal society, salary equity and others. So I have three questions for you:

1) Why could we consider Nora a feminism icon? Why she still important as a symbol today?

I think of my daughters. The elder is a structural engineer and the younger the features editor of a woman’s magazine. Both chose their professions and are happy and fulfilled in them.

But their grandmother was forced to leave school at 14 and her father found her a job working in a shop. He never thought to ask her what she wanted to do with her life and she never thought to insist. In those days, that was the way things were.

And of course she was expected to leave her job as soon as she got married. She was then expected to devote her life to the welfare of her husband.

To her dying day she regretted the fact she had not been able to become a nurse. I know she would have made a very good nurse; and so what happened to her was not just her loss, but society’s loss as well.

The story of my daughters and their grandmother shows just how much society has changed. How profoundly and how rapidly things have changed since the days of Ibsen.

And everyone would agree that this change has been good for everybody.

And yet my eldest daughter suffers because her male colleagues are paid more than her; and my younger daughter is continually having to write stories of rape, sexual abuse, domestic violence and all the crimes against women that are happening all over the world today.

Because almost everywhere in the world women are still treated as second class citizens.

When I first started living as a woman people would often shout abuse at me in the street.

The assumption behind these insults was that having been born a man (and so a Lord Of The Universe) I had abused and degraded myself by living as a woman.

So Nora’s story - the story of a woman who insists on her own value as a human being and her right to live her own life - is as important as ever.

2) Nora's departure from her house, her gesture of closing the door and going to the outside world, can be equated to which transgressive gestures of today?

My daughters call me “dad” because I am their dad and always will be.

My grandson calls me “grandma” because I am his grandma and always will be.

And we are beginning to understand that sexual and gender identity is all far more complex than we ever imagined.

Recent scientific research shows that humans are not just ‘male’ and ‘female’ but that there are at least six different sexes!

Ibsen was completely remarkable because he did not stifle the woman inside him but instead explored and expressed her in his work and created such compassionate and fully human female portraits.

Such a thing was unheard of in his day and is still pretty transgressive. Think how few films there are - especially Hollywood films! - which have a woman as their central character….

In my own life, like Nora, I had to leave behind a male controlled identity which did not suit me and was not true to myself.

That’s what happened when I started to live as a woman. I had to leave my male self behind - and slam the door behind me.

And then walk out into the unknown…

I think we all do that to a greater or a lesser degree as we move away from the constraints imposed on us by our society and our upbringing and start to live out the truth of our authentic selves.

3) To what extent her piece ( "The Gospel According to Jesus, Queen of Heaven") converses or relates to contemporary issues of feminism?

I have a written a lot of plays - about 80 which have been performed! - and they are all very different from each other.

But a common thread that runs through them all is an exploration of what it means to truly respect the feminine in our world and in our selves.

“The Gospel According To Jesus Queen Of Heaven” is perhaps the most radical in that I portray so sacred a character and ask what would happen if we really believed what Jesus says and lived out His truths in our own lives.

He tells us not to judge each other. So what would happen if we really did stop judging one another because of the colour of their skin, or their gender identity, or their sexual orientation?

What would happen if we really obeyed His command to love one another?

And how would that change the world?"

And of course I have my anxieties and my fears but no real idea of the context in which these words are being published, except to know that “O Globo’s” politics are generally right wing…

Or any knowledge of how they will be received.

No idea whether it will cause ripples or waves or whether it all might just apparently sink without trace.

But that is how it is so often with these encounters. And I am so glad I am with my beloved companions.

So we can walk, hand in hand, into this unknown world.