The fragile seeds of hope in a dark time.

The last time I met Brenda she looked proud but frail. She had been denied her right to education, her family had thrown her out onto the street, she’d had to leave her home in the north of Brazil and travel to Sao Paulo, she’d been heavily involved in prostitution and drugs.

She was the most astonishingly courageous survivor of the profoundest abuse. And through it all had become empowered by a scheme run by a Sao Paulo drama school to find work as a receptionist.

On Wednesday I went back to the drama school on Roosevelt Square and there she was and it was such a joy to see her.

Overflowing with health and energy and vigour, feet strongly planted on the ground, radiant in her whole presence. 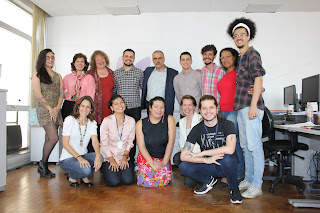 The day before we had met Ariel in the office of Transcidania (trans citizenship) a scheme run by the city of Sao Paulo, open to trans women to offer them the opportunity to attend high school and prepare themselves for regular employment. And which pays them the minimum wage while they do so.

Drop out rates on the course are minimal; schools the young trans women attend show a marked reduction in violent behaviour, and it’s obvious they are transforming not just their own lives but the atmosphere in the institutions they attend.

And Ariel was about to begin post-graduate study in anthropology. She was going to research and understand the origins of the hostility we trans women face.

On Thursday a participant in my writing course told the group, in a very matter of fact way, “my sister is trans”. And he told the story of how when she came out she was faced with the choice between working in the beauty business or working as a prostitute.

She had chosen to train as a hairdresser; but in her heart had always wanted to become a vet.

And that now, approaching 40, she had decided to go back to university to make her dream come true.

They are so beautiful, these little fragile signs of hope.

They are under such threat.

Riot police in full military gear had blocked our entering the building that night. We had been forced to enter through the basement garage at the back. An entrance also blocked by heavy steel doors; and we had had to explain who we were to the guards before they let us in.

The building housing the workshop was managed by a politician in favour of the president’s impeachment, and that night it was the target of the demonstrator’s fury.

For that was the night Dilma Rousseff had been forced to step down as president. That was the night her multi racial and gender balanced government had been replaced by one consisting entirely of white heterosexual men.

That was the night that government, which is unelected and represents nobody but the wealthy elite, abolished the ministry of culture.

Together with the ministries for women, for racial equality, and for human rights.

Democracy has just been abolished in Brazil. It happened openly. But bit by bit it is covertly being destroyed in so many other countries of the world.

A tiny group of the obscenely rich are doing everything in their power to hold on to their stolen property and accumulate still more wealth if they possibly can.

And in doing so destroy all hope for justice and a better world.

I barely speak the language here and I barely understand a fraction of what is going on. But I know the struggle the people are living through here is an incredibly powerful and important part of the struggle for the soul and future of the whole world.