When I went in to see the surgeon he was staring at an x-ray image of a leg on his computer screen.

A leg so shockingly out of its proper alignment you could call it deformed.

My leg. My left leg.

“Surgery is the only thing that will help you”, the surgeon said. “This is how it should be”.

And he pulled the leg back into alignment on the screen. And said, quite casually, 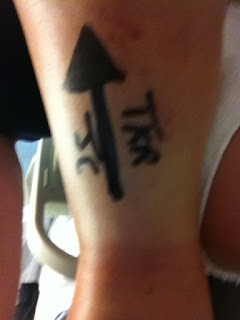 And that’s why I’m in this hospital bed waiting for the time this afternoon when they set to work with scalpel and tourniquet and bone grinder and special glue.

With everything in the toolbox they need to fit me with a new knee.

And I’m frightened, of course, my leg not being an abstraction on the computer screen but all too obviously a thing of flesh and blood and sinew and nerves that will undoubtedly hurt a lot.

The surgeon had spoken with the calm assurance of one for whom these things were fairly routine. Fascinating too. He obviously has an abiding fascination with knees.

And so I’m also trying to get my imagination round the idea that maybe soon I’ll be on the road to not being so disabled any more.

And I realise that for the last several years I’ve been imperceptibly accustoming myself to the idea that i will never walk properly and easily again and that maybe this idea was false and that I will actually be able to walk.

And I’m thinking of the times all those years ago when I was forced to live as a boy and totally convinced that I was, morally somehow, twisted and deformed in exactly the way my leg has become.

And I wonder if all this is connected.

Of how I went to physiotherapy afterwards until all of a sudden I found I was with a group of men in a gym in the old Royal Infirmary playing some appalling team sport or other  and felt too embarrassed and too ashamed to say that no. No such a thing was impossible for me. And so I abandoned physio and wonder if it would have made any difference if I’d been able to stay.

Or maybe its 'll those feelings of fear and of shame that afflicted me for so many years ended up being stored in this poor knee.


We’re taught, I think, that a knee is just a mechanical joint that doesn’t connect with how we feel.

But then we do also talk about feeling “weak in the knees” when we are in the grip of some powerful emotion and so maybe it’s not that far fetched to see a connection between our deepest feelings and our knees.

Or, in this case, our left knee.

And I find myself thinking of how when I was beginning the process, the serious irrevocable process, of leaving ‘John’ behind and beginning to live as a woman I was somehow in the same place.

Proud of who I as John was in so many ways and everything I had achieved against very great difficulty.

And aware that the pain John suffered was terrible but also familiar and I knew how to deal with it.

A step into a very scary unknown darkness.

Just like the step I will take this afternoon when the anaesthetic comes and turns off all feeling in the lower half of my body. And when I will probably also go into sleep.

And  suddenly life feels beautiful and precious and I feel unexpectedly affectionate towards my dear old knee.

We went for a last walk together, me and my knee, along the hospital corridors.

We ended up in a place called “Spiritual Centre” where there was a room called “Sanctuary” so we could be quiet for a while.

And I found myself feeling sad and sorry for this poor old knee. That has carried me so far for so long. And endured so much suffering and felt so much joy, and recorded it all in the very structure of the bones.

And always done its best.

And worn out now.

And about to be discarded.