Feeling happy in The Albemarle Sketchbook 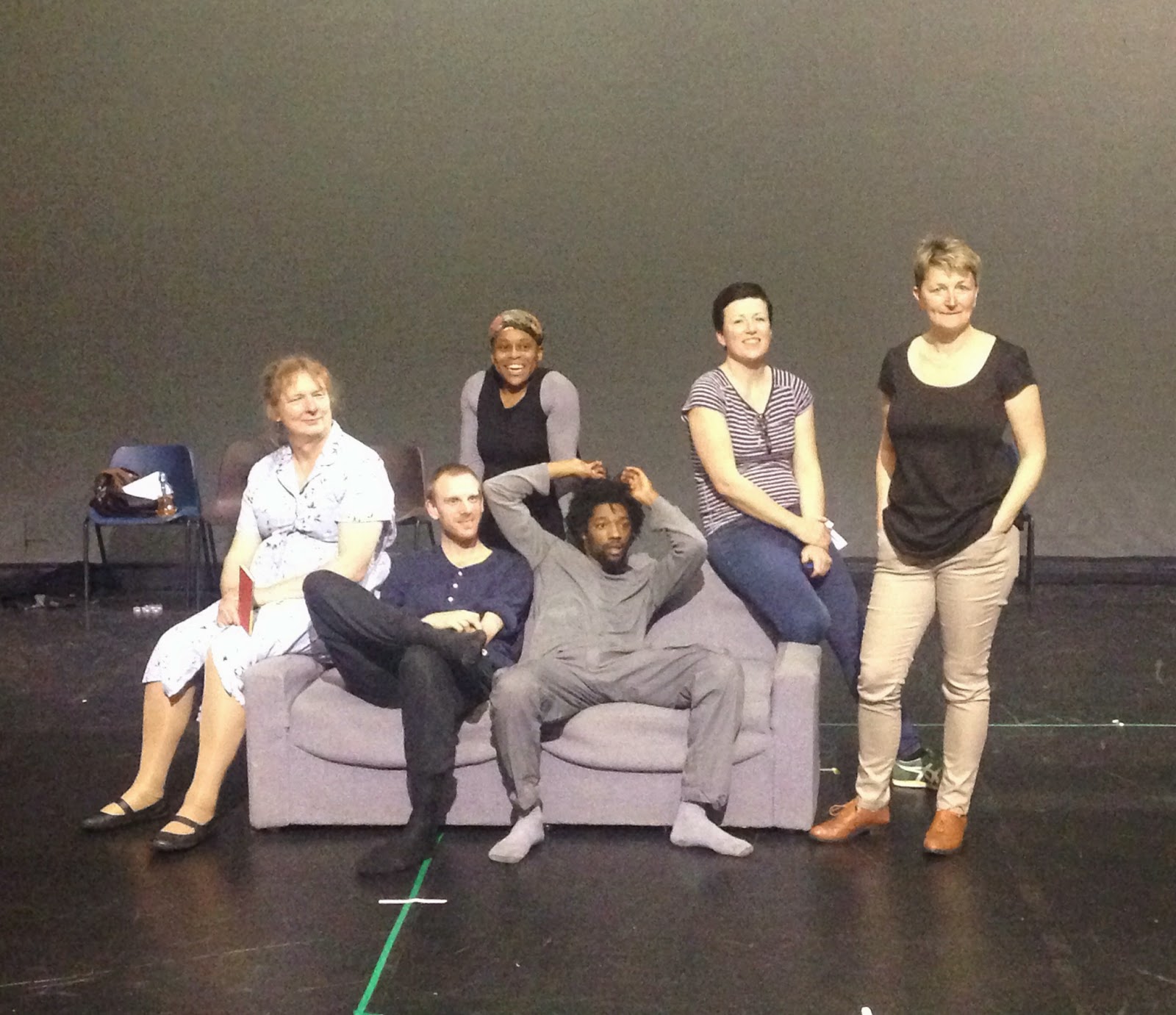 This is me onstage in the Courtyard Theatre of The West Yorkshire Playhouse last Sunday.

I’m with the rest of the cast of Chris Goode’s “The Albemarle Sketchbook” and we’ve just done our first run on stage. I’m feeling happy, I think we all are, because the run has gone well and we’re going to perform the show in a couple of hours and we know it’s going to be something special.

I’m wearing a print frock of a kind I wouldn’t normally wear because I’m playing Chris’s mother. And it’s good we’re all feeling happy because this is a show about happiness. It’s inspired by a happy dream Chris once had and it’s a lovely, tender, thoughtful piece of work that in its own very special and quiet kind of way is profoundly revolutionary.

I feel especially happy because, without being rude to all the lovely studio theatres I’ve performed in, this is a real grown up theatre and this is the first time I’ve performed on a grown-up stage.

And that makes me happy because so many years ago I discovered theatre by acting in plays, and playing women’s parts, and I loved it. I felt I completely belonged and I didn’t feel shy and frightened any more.

And that was when I finally understood about all the feelings of strangeness and not belonging to my own body and wanting to play with girl’s toys and wanting to wear girl’s clothes and knew I wanted to be a girl.

And knew that was utterly impossible, because we’re talking fifty years ago and all I knew about men in women’s clothes were the dames in the pantomime, and how ridiculous they were, and the young man in “Psycho” and how sick and evil he was, and I felt I must be sick and evil and ridiculous all at once and knew I couldn’t tell anybody and the only thing I could do was try my very best to be normal.

And that didn’t work out very well, it never does, and I did want to keep on acting but when I went for boy’s parts I was stiff and shy and embarrassed and completely hopeless and that is why I have spent most of my adult life absolutely convinced that acting and performing were things I absolutely could not do and they were completely not for me.

But theatre obviously was. There was something absolutely compelling about it; because even though theatre had become a place of terror and shame I was totally drawn to it, in spite of myself, and it became the subject of my Phd and eventually, 15 years later, by a serious of outrageous accidents, writing for it became my profession.

And even though looking back on it it seems clear that becoming a playwright was probably not my true path, in a way, but a response to blockage, I am so proud I did it and so proud of what I achieved.

And then the whole process went a stage further last October when Chris Goode asked me to take part in the development process for his “Albemarle” and I remember being quite nervous about it, because although I’ve taken part in quite a few development processes as a writer I’d never done so as a performer and had no idea, really, as to whether or not I could.

But I could, and ever since then seem to have been performing more and more. And it still amazes me, somehow, that I can do it.

A month ago I was playing the lead in a film, “High Heels Aren’t Compulsory”, by Lock Up Your Daughters productions, and I remember the last morning I had to walk down a corridor towards a door with my name on it, Caroline. I was playing a post transition transwoman academic turning up for work and this was me seeing my female name on my office door for the very first time.

I remember waiting for them to say “Action!” and not knowing quite what I would do, but knowing when the moment came I would find my spot and be absolutely in it and do it. Whatever it was.

And I did, and was amazed I could, and felt a bit of a fraud when the lovely director told me it was so good for them to be working with someone as experienced as me. Because really I’ve hardly any experience at all.

I feel a bit absurd saying it, but it’s as if finding my spot, finding the place I need to stand for the camera, is about finding my place in life also.

And I’m glad it’s happened so strongly in Chris Goode’s “Albemarle” because this is all about healing. Healing from a deep wound; and his beautiful work, among so many other things, is about healing also.

And there I am on stage and feeling completely at home there.

Because I am at home.