When I got to the Glasgow Tron last night to see The Maw Broon Monologues I found myself half expecting the street to be filled withe same crowd of angry protesters that were there when the first version of the show opened in Glasgay! 2009. 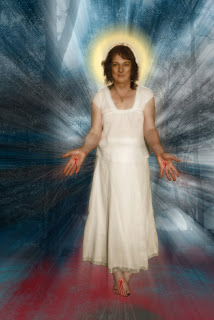 In their hatred of transwomen they had jumped to the conclusion that a transwoman like myself could only be portraying Jesus in a spirit of mockery and disrespect.

And so hundreds of them turned out with their Virgin and their placards on which they had written inspiring christian messages like this:

GOD SAYS MY SON IS NOT A PERVERT

& I can boast of having done my bit for christian unity in that devout catholics and evangelical baptists dropped their intensely christian dislike of one another to unite in piously christian hatred of me.

On the Friday of that week, the catholic archbishop of Glasgow, Mario Conti, put out a statement to the effect that it was “hard to think of a greater affront to the Christian faith” than my show.

My show about which he knew nothing; and about which he spoke in terms that it now becomes clear would have been far more applicable to senior members of the catholic church than it ever was to me.

The cast of the Broons show, and especially Terry Neason, were supportive and lovely. But their show started half an hour before mine, and so they would have to leave me, and I would sit on my own in my dressing room and listen to the cheers and the laughter and the applause that greeted them.

None of which helped me much, somehow, as I tried to cope with my nerves and the knowledge of the immense hatred which I had somehow managed to inspire.

I felt lonely and afraid and wished I could write something as clever and as good-hearted as the Broons show was then and in its new incarnation is again.

Instead of struggling to write trans theatre, which had hardly been attempted before and probably, as far as I could tell, would never  be attempted again.

Yet when I look back at my GOSPEL ACCORDING TO JESUS QUEEN OF HEAVEN which was the fruit of so many years of internal struggle against self-hatred and shame and which, when she eventually came to light, aroused so much hatred and opposition... when I look back I think maybe it is this play of which I am the proudest.