Play 6: collaborating with a Mr. Shakespeare

Something I learnt very early on when I started playwrighting was that you have to know the right people.

That discouraged me hugely, because as far as I could tell I didn’t know anyone useful at all.

I was wrong. And then amazed, as time passed and I kept trying, how somehow I came to know exactly the people I needed to.

Romeo and Juliet was a case in point.

A good friend, Mark Bunyan (www.markbunyan.com) happened to have a musical produced by the Cockpit Theatre, and directed by Ian Brown who happened to be coming up to Scotland to become director of TAG, which stands for Theatre About Glasgow, and was, and still is, the educational wing of the Glasgow Citizens’ Theatre.

Mark introduced us to each other and Ian had had the idea of adapting Romeo and Juliet for Glasgow schools.

And that’s how my first professional writing commission for theatre came about.

Their policy at that time was to mainly tour schools in areas of musltiple urban deprivation, and these were the main venues for the tour.

So my brief was to create a version that:
So I kept the bits of the text that moved me or made me laugh or seemed essential to the story and cut the rest. And that was at least a third of the original play gone. I was amazed. I didn’t know you could do that to Shakespeare.

And then I took the bits that were left and made sure that I understood them. I modernised the grammar, and where there were words that were obscure I replaced them with others, reliving the moment in my imagination and trying absolutely to keep the feeling and rhythms of the original. As if I was translating from a foreign language. The result looked a bit like this:

Come night, come Romeo, come day in nightAnd you will lie upon the wings of nightWhiter than new snow upon a raven’s back.Come, gentle night, come loving black browed nightGive me my Romeo, and when I dieTake him and cut him out in litle starsAnd he will make the face of heaven so fineThat all the world will be in love with night...

Lord how my head aches! What a head have I!It beats as if it would fall in twenty places.And my back.. at the other side.. ah, my back, my back!Beshrew your heart for sending me aboutto catch my death with jauncing up and down.

Sometimes everything would need to be rephrased

I was really shocked to see how frankly Shakespeare can talk about sex. Because in the past I’d just let the words kind of drift over my head, I’d always assumed he was mostly polite. Really having to understand what he was saying was a revelation. 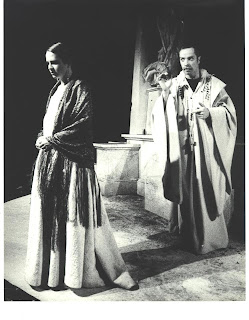 The photo, of the late Robert Paterson as the Friar and Helen McGregor as Juliet, makes the whole thing look more conventional than it actually was.

The design was by Stuart Laing (http://www.untitledprojects.co.uk/) and he clothed the actors in an amazing edgy mix of renaissance glitz and Doc Marten boots. And Ian Brown’s production, among other lovely things, beautifully did the balcony scene without a balcony.

Our Romeo, Robin Cameron, was playing the romantic lead in the STV soap opera "Take The High Road" at the time, and he was always mobbed by autograph hunters.

A royalty statement from Christine Hamilton (http://christinehamiltonconsulting.com/), who was their administrator says my royalty came to £120.00.

But how amazing to get the chance to enter Shakespeare’s mind, learn his storytelling technique from the inside, and watch its impact on totally frank and uninhibited audiences.

In that sense, what I learnt was priceless.