Another accidental meeting led to my next play. My partner, Susie, was on a train coming back from London when she met a lovely young woman sitting opposite her. Who turned out to be Jenny Killick, who happened to be travelling up to Edinburgh to work at the Traverse theatre.

We met in the downstairs theatre of the old Traverse in the Grassmarket because  she wondered if I might like to write a play for that space? And I didn’t know really, but had had a pint just before meeting her, being very nervous, and then felt too shy to ask where the loo was.

So by the time we’d had our meeting I was bursting and rushed into the gents in the Grassmarket which has disappeared now, but used to be under the War Memorial. I went to one of the stalls, which was unusual to me, and when I looked around the shape of the public convenience reminded me of the shape of the downstairs theatre in the Traverse and I had what I thought was a quite brilliant idea for a play.

So I wrote it down, several pages, and at the end of the letter wrote PS I’ve got another idea set in 17th century Venice.

I was signing on for dole money at the time, so lunch was a bit of an unheard of event. I was all geared up to talk about the public convenience play (the decaying gents loo being a metaphor for the state of 1980’s Britain) but she never mentioned that.

She wanted to talk about the Venice idea. Which was based on a true story about the 17th century poet Quevedo hatching a plot to work with his patron, the Duke of Osuna, to bring down the Doge and make Venice part of the Spanish Empire (http://en.wikipedia.org/wiki/Francisco_de_Quevedo).

I had found the story in a large volume of literary history in the National Library of Scotland (which is how you tended to get information in those days) and never took it really seriously until confronted by Jenny asking me about it. Very seriously.

Very seriously indeed, and then asking me if it was going to be an epic. This question alarmed me somewhat because in all honesty I didn’t have the slightest idea. I was about to say “no” but then, a bit to my surprise found myself saying “Yes”.

And before I knew it I had a commission from the Traverse theatre, for the upstairs theatre this time, due to open in August 1985.

I stopped signing on, very proudly; and started taking Rebecca to nursery every day, going to the spare room of a dear old friend, and writing the play until it was time to pick up Rebecca again.

And that’s how the play got written.

I had briefly been the Scotsman’s television critic during the Falklands War (which had been a bit complicated because we didn’t have a television at the time) and when the play came out critics said that was what it was all about.

And I am sure they were right, but I hadn’t meant that. I hadn’t meant anything very much.
I recently heard a public reading of the play, beautifully directed by Ben Harrison (http://www.benharrison.info/) and with a gorgeous cast, who taught me that there were probably 3 other really important things that had shaped the play:

The first being an LSD trip Susie gave me for my 22nd birthday.

It’s powerful stuff, LSD, risky to take, and I’ve never had any since, but I have to say I had a marvellous time. There was a whole amazingly creative succession of incredibly vivid events, connected to every day reality and yet in a completely different dimension.

I remember the sensation of bouncing up and down in the bed. In heaven.

Iremember staring for what felt like an eternity at the most amazingly beautiful cracks in the wall.

I remember staring at myself in the mirror: and seeing a skull. As if staring my own death in the eye: and not being the least bit afraid.

And I remember seeing a woman there, me, myself, someone I utterly recognised and utterly liked. For the very first time, perhaps, seeing who I was.

(And the play has something of this quality)

A few years later I started going to a dream group. The leader was a totally remarkable woman called Winifred Rushforth (1885-1983), someone incredibly wise.

She had such a real deep wisdom about her (http://en.wikipedia.org/wiki/Winifred_Rushforth) and it was the most astonishing good fortune that allowed us to meet. 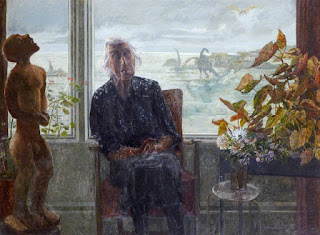 I was in one of her groups for maybe 2 years: she taught me to trust myself. She taught me the language of dream.

(And the play has something of this quality)

My elder daughter Rebecca was 4 years old. Me and her went along to another meeting with Jenny, this time in the upstairs theatre of the old Traverse, which was freezing cold and dusty and felt very unloved. We slid down the banks of seating bump bump bump and then went off to meet Susie in a basement wine bar. (That is now called The Blind Poet).

Becca turned the floor into an ocean, the tables into islands, and the chairs into boats. And we travelled about the bar without touching the ground because the ocean was infested with sharks.

When it was time to leave we took a deep breath and ran as fast as we could to the door, and then on up the stairs really fast, “because the sharks can climb up stairs!”.

And the sharks didn’t get us and I went off to Glasgow to review a dance show, and Becca and Susie went home.

As i sat on the trainI knew my daughter had taught me what theatre was.

And that’s why I called my twitter account jocliffordplays because I still am, playing, and am determined never to stop.

Just before rehearsals started my younger daughter, Katie was born.

Just before the end of the play everyone gets a present:

A WOMAN comes on with a parcel.

WOMAN. Are you Pablo?

WOMAN. Something for you.

PABLO tries to hide the baby.  Then he understands.

They have a big hug.  QUEVEDO smiles benevolently.

In the production she was an amazing sculpted baby made of wood. And then afterwards in the bar everyone gave the real baby a hug; and Katie always said: “I’m the baby in “Losing Venice”.

Maybe we all are.

And maybe in the end this is a play about love....