An encounter with the Mother

I remember those early years getting so frustrated. No-one in theatre seemed to want to put on new plays. And no-one seemed willing to even read them.

The Scottish Society of Playwrights had a reading service, in the sense that you could send a play to them, someone would read it and write comments that would be sent back to you. They were sometimes helpful, but not enough: they weren’t getting me closer to a production.

I learnt that radio was hungry for new plays, and that if you wrote one and sent it to Stewart Conn, the head of radio drama in Scotland, you would get a reply.

And so I did. I sent him two or maybe three plays that he was polite about. And then he commissioned me to write another one.

It was called Desert Places, it was broadcast some time in 1983, and it was the first time I was paid for a play.

I got the idea on Iona.

I loved the ruins of the nunnery there. The history of the place was displayed on boards round the cloister walls. The last one said that at the time of the Reformation gangs of reformers used to travel round Scotland smashing up the monasteries. It took a long time for them to get to Iona, and when they arrived they found the place a ruin and only one old monk and one old nun living there. All the others had died.

The other thing that struck me was a sheela-na-gig on the nunnery wall: a fearsome female figure with a head like a skull who was laughing and showing her teeth. With big breasts and great staring eyes and her hands pulling open her vagina. 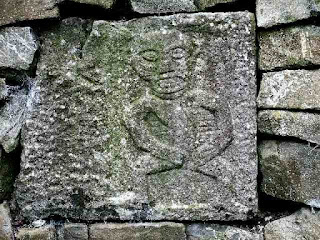 And I combined all this to write a play that Patrick Rayner directed and that we recorded on location in Crichton Castle.

And then me and Susie bought a bottle of cheap fizzy wine and drank it as we huddled round the radio.

And afterwards I remember a sense of anticlimax. I felt like I’d dropped a stone down a very deep well and hadn’t even heard it splash. And maybe hundreds of people had heard the play, maybe even thousands, but because I hadn’t seen them I couldn’t quite believe they were there.

And I hadn’t heard the play from that day to this.

Listening to it last night I was struck by how strange it was. It seemed to come out of nowhere, this weird story written by someone following their own preoccupations without any regard for anyone else’s.

Stewart Conn (http://www.stewartconn.com/index.html) and Patrick Rayner are another two people to whom i owe my artistic life. I’m amazed at the trust they placed in me.

But although strange, I think the play’s strange in a good way. It’s overwritten, I don’t know how to end scenes and I haven’t really understood how to use radio... but there’s something rather amazing going on. Something that still haunts me.

I loved the scene that was mostly in Latin. And the scene mostly in gaelic. And the character of Agnes, the old nun who sleeps with the monk and worships the Sheela-na-Gig, who she reveres as the Mother:

“I wonder what they said when they found you in the wall, dark mother of hidden corners. You frightened them too - they would have trod you underground but you scared them. They thought you might destroy them, so they set you in your corner just in case. Now they run from you in terror and won’t even know you’re there, but you’ll catch them, catch them in the end. Your enormous breasts, your great staring eyes. Mhairi says you’re the Mother. You’re as bitter as life, as bitter and frightful and full of wild spite. She says if I see you I’m not to be frightened, you’re the witch in the story I must greet as a friend. I walk up and I kiss you, though my gorge rises in terror, I walk up and I kiss you and then... then you become the true lover I’ve always imagined. We take hands and we dance. We dance.”