It was the last day of performances of “Leave To Remain” today. I got to the church early, and sat in the graveyard to drink in the sunshine. There’s something very tender about the Edinburgh sun this time of year that always makes me want to gratefully drink up every drop.

It was also the first day of rehearsals for “Great Expectations”; and in the meantime an email came in from the producer. With a picture of the enormous creative team. It’s extraordinary. So many people! 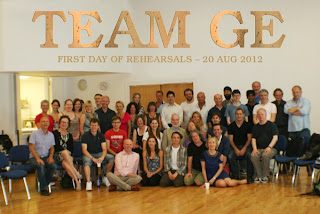 And then the two of us went into our tiny Lady Chapel to set up the chairs.

Or began to, until a lady vicar came in to lead communion.

So we took communion, Suzanne and I, in the midst of the half set up chairs, and it felt like a very beautiful blessing.

The chairs we set up were nowhere near enough, as it turned out, for a last minute influx of what felt like hundreds, though it was probably no more than six, who suddenly appeared after the show had begun and meant we had to start from the beginning again.

“This is not a play”, we said, as always, and “We won’t be pretending to be other people”, and went into our stories of funerals and dyings and I found myself reflecting on how revolutionary this show is, in its quiet way.

The discussion afterwards was extraordinary - so many courageous and loving stories. People seizing the opportunity to be there openly with their grief. Without any need to hide it or manage it or conceal it or put on a brave face about it.

And maybe that’s the most valuable thing we do.

I met my daughters afterwards and we walked up Lothian Road in the sunshine. Me so proud to be with them both. And with the grandchild, waiting for the best time to be born.

Loving texts from my new partner.