Queen Jesus at the Tranny Hotel 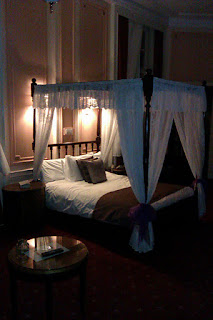 The first thing that happened when I got to the Tranny Hotel (aka the Adelphi Hotel in Liverpool) was that a film crew asked me if I’d mind them filming me when I checked in.

The truth was I did and I didn’t. I had that dishevelled slouchy air you have when you’ve been travelling on train for 3 hours and couldn’t pretend for even half a second to be ready for my close-up.

And how dull to be checking into a hotel.

How banal: it’s what I do when I get to a hotel.

In the end they couldn’t, because they hadn’t done the paperwork.

So they said they’d film me going up to my room instead.

Into the lift, get lost in the hotel corridors, and eventually into the room.

But like the film crew, at first it didn’t actually make me feel good about myself.

All the little props I’d brought along seemed inadequate.

I felt ugly and dull.

The feeling intensified when I got to meet some of the other participants and performers, who all looked quite gorgeous. I couldn’t quite understand what place there was for a dowdy middle aged trans woman in the midst of it all.

When I got talking to an especially glamourous drag queen she told me how inadequate she felt too. “I feel a bit of a sham’, she kept saying. “I’m just a gay boy who likes wearing dresses”.

At which point I began to understand that we’ve all been made to feel like that, “not right”, as Mandy Romero put it in one of her lovely poems. And that the focus of my artistic activity was the same as the extraordinary and generous vision Mandy has for the project as a whole: to celebrate us and affirm our being in the world.

The next day I performed a new 30 minute version of THE GOSPEL ACCORDING TO JESUS, QUEEN OF HEAVEN - one I had never done before. I put on a dress I found in a charity shop, guessing vaguely that’s what Queen Jesus would probably wear, cleared the room of the hotel gubbins - the trouser press, the kettle, the tray of freeze dried instant coffee, the Visit Liverpool leaflets - and opened the curtains wide to let in the light and sunshine.

I did it four times and learnt so much. There’s a great power to performing in so intimate a space. People were moved to tears. I had a sense, giving my little gifts of bread and wine and blessing everyone afterwards, that somehow I had stumbled on a way of doing something very special.

Sometimes people were able to stay behind afterwards and talk. I remember one woman wiping away her tears and talking about how she’s recently come to understand just how many life choices had been made for her simply because of her gender.

And how damaging that had been.

That evening I went to eat in a veggie, alternative-y kind of place and saw this sign stuck to the mirror in the ladies:

Slowly I begin to understand that my struggle as a trans person to truly value who I am is not the isolated lonely and rather meaningless thing that for so many years I took it to be.

It’s as if it’s something at the sharp end of a fierce struggle to move on from patriarchy.

It’s about everyone’s struggle to find joy and solidarity in being human.