Wednesday part two: on a double bill with Troy Perry 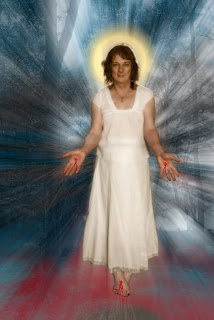 These are all hard things. especially as Jean just now reminds me so strongly of her daughter, my wonderful partner Susie, in her last days.

What makes it worse is that because her main difficulty is her failing heart so much of what she is going through reminds me so strongly of what was happening to me when I had heart disease, and all the suffering involved during that terrifying time.

After I finally got home on Wednesday after four hours in the hospital I had very little time.

I spent some of it putting polish on my nails to try to recover myself. Because, in spite of everything else, her total inability to accept me fully for who I am is a kind of constant attack on my deep self,existing side by side with genuine affection and love. Something I somehow I have to continually defend myself against.

I put on a favourite dress, did my make-up and hair, and left the house a little later than I'd meant to.

It was on the road to the station that I got attacked by fear. Sweating, heat hammering, massive butterflies, weakness in my legs... fear on a scale I have not experienced since 2006. When my heart really was failing. Timor mortis they call it: terror of death approaching as the heart fails to function properly.

But then I remember I was in a state of terror without being aware of the cause. This time I knew what I had just been through had weakened me.

It was through performing, way back when I was fifteen, that I first discovered I would have been happier as a girl. That it was a girl I really felt myself to be. Way back then, in 1965, there was no help available of any kind, and I had had to resign myself to a life of utter solitude. Of hiding from the world who I really was; because otherwise, I felt absolutely certain, everyone would hate and despise me. And I would die of shame.

Performing I felt would give me away: which was why I stopped it. And why for so many years the theatre was a place of terror.

The strange thing about those first performances of "The Gospel According To Jesus Queen Of Heaven", in November 2009, was that they brought those ancient terrors back into my life.

All those demonstrators, outside the theatre in their hundreds, did know I was transsexual, and did hate me.

Which was one reason why it was all so very traumatic.

But on the other hand I did not die. There I was, walking down the road to catch the Glasgow train. Still terrified, but not dying. Not even ill.

I was a little early getting to Glasgow, as I meant to be, and could sit out in George square in the extraordinary sunshine.

It was amazing to me to be performing at an event called "An Evening With Tro Perry & Jo Clifford".

The Metropolitan Community Church, which Troy founded, was and remains an incredible source of strength and sustenance for me (you can find the story here http://mccchurch.org/overview/history-of-mcc).
Also, I knew the event was being filmed by Ruth Reid, the incredibly talented film-maker who is making a documentary about me.

Friends and colleagues were coming. And also (though I didn't know this) members of the Catholic and Evangelical congregations that had picketed me the first time around.

So there was some pressure. What amazed me as I walked towards the venue was the extent to which fear had left me.

I am very fortunate to be getting help from Susan Worsfold, an amazingly gifted Glasgow based voice teacher (http://www.susanworsfold.co.uk/Susan_Worsfold/Welcome.html) and part of it is down to the techniques she has taught me.

But there's something else going on. The main character in the book of "God's New Frock" is someone trying to find her voice. And with her voice find her identity.

I can't really talk about what happened at the event itself. Except that the fear left me alone. Everyone listened (somehow, I seem able to hold an audience). And afterwards, people were very warm and kind. Including the Evangelical and Catholic people in the audience.

My wonderful dream teacher, Winifred Rushforth, would say "something is happening".

That whatever all this is, it's happening because it's part of the journey I have to make. Back to an old self that I thought all those years ago was lost for ever. And at the same time forwards too: very much into the unknown.