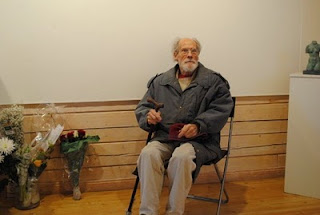 I met this beautiful man in the summer of 2009, when i was a Robert Louis Stevenson fellow at Grez-sur-Loing.
His name is Bengt Amundin. He is a swedish sculptor. If you speak swedish, you can find out more about him here:
http://www.amundin.se/bengt/

He was already in his nineties when I met him, and was there in Grez with a young film-maker called David Wadstrom, who was making a documentary film about him.

I speak no Swedish, and Bengt spoke no English, so on one level we could communicate little.

But I loved being in his company. He had been a sculptor all his life, very active and well known in the early sixties, and still very clearly a hugely creative, curious, and active artist.

He came across as someone who loved life but was also somehow very ready to leave it.

There was a kind of luminosity about him.

One difficulty in his life was that his art had fallen out of fashion and his achievements had been largely forgotten.

David admired and loved him and wanted to set this right: first with his film, and then with assembling a retrospective exhibition of his work, which opened in a gallery just outside Stockholm the other day.

I was invited to the opening, but sadly could not go.

And then today i received this message:

"Dear Jo
After the opening night of the exhibition Bengt passed away. It happened in the car just outside the gallery.
It was a good day, all his family was there and he loved the opening."

I guess the photo was taken at this opening. That what we are seeing is a man just before his death.

As soon as I post this, I go off to Jean's house. Her legs are a little better; but her chest sounds worse.

And she is being tormented by nosebleeds. these terrify her because they were the first sign of her mother's death.

But early this morning she got up, with great pain and trouble and strain, to go to the day hospital. A visit I think she hopes will prolong her life.

I can no longer deny the fact that in the not too distant future I, too, will be in the same situation.

I hope I can let my life go.

I hope I keep creating.

I know which of the two deaths I would choose.