I went to the Transgender Europe Council meeting at Malmo last weekend.
There were about 300 trans activists there from at least 20 countries.
This is how it was for me:

I guess most of us trans people have had to get accustomed to isolation.

We all have to be accustomed to danger. To the kind of abuse and physical assault typified by that suffered by members of the Turkish delegation soon after their arrival; and again by them at the hands of the police who should have been there to assist them but only added to their suffering.

It is strange to believe that my time of feeling in danger of asault and abuse - although very recent - seem to have completely passed.

Partly, I suspect, because I present as a middle aged woman. And we are invisible. Considered of no consequence or threat to anyone.

Prejudice can occasionally be useful.

As for being alone, the years when i believed myself to be the only one are long over, thank God; and as time passes, I become more and more aware of the universality of being the way we are.

But that doesn’t alter the fact that for most of my personal and professional life, wherever I am, I am the only trans person in the room, and so can easily feel myself vulnerable to scrutiny and judgement.

So to prevent a lapse into permanent paranoia I have had to develop a whole series of coping mechanisms that have become so habitual as to also become invisible.

Until, that is, I am in the Conference.

Something happens, my heart expands, it is as if a weight has lifted off of me, and at first I can’t quite grasp what has changed. Until I realise: I am in the majority. I belong.

I remember experiencing a similar sensation at the Berlin Council in 2008.

I have grown so much in confidence since then; and what soon becomes apparent is that I am not alone. The whole organisation has also matured.

At the very outset we receive a message from Thomas Hammarberg, the Commissioner for Human Rights of the Council of Europe. He tells us, very clearly and straightforwardly, that the rights of transgender people are a top priority for his office. Two years ago I suspect it would have been unrealistic even to imagine that so senior a figure of the European Community would make such a statement.

Yet there it was. And it was followed by a wonderful artistic and imaginative response to us and who we are from Vladimir Luxuria, Italian activist and former MP.

She spoke of herself as a “person in continuous becoming”; of us as beings in continual evolution; of our experience making each one of us unique, unrepeatable and irreplaceable.

She confirmed my feeling of the nonsense of the process I have recently had to go through - of having out of expediency to accept a diagnosis of being “mad”, “disturbed” and to submit myself to assessment from two psychiatrists so they could determine if I had the right to determine what I needed to do with my body.

She spoke of the sufferings endured by so many of us throughout the world now and in the past. And, crucially, of the criminal forced surgeries sufered by intersex people.

She spoke of Hans Christian Anderson writing a letter to his lover in which he described his feelings towards him as being feminine, of a woman towards her lover.

And suddenly to see so many of those stories, like my plays, as being the product of a trans sensibility was immensely exciting.

“We do not suffer from “gender dysphoria”. But those who oppress us do. Those who deny their own gender richness. Their own possibilities”.

As for us, she concluded, we are moving towards Gender Euphoria.

The next session,however was rather drier. 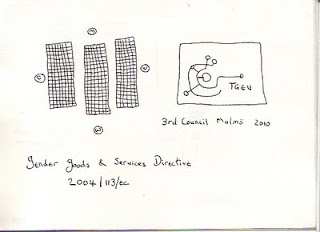 I started to draw in my notebook, because I wanted to remain present.

Because what was being said was actually very important: and the “Gender Goods and Services Directive 2004/113/ec” that I felt so detached from is actually of crucial importance in terms of our rights not to be denied goods and services to which we are entitled because of our transgender status.

I thought, not for the first time, of what a crucial role culture has to play in the communication of such things. Because they need to be communicated: even in an audience of activists, I suspect that a good number of us were as ignorant (and perhaps also pessimistic) about our rights as my own self.

And I started to dream of using theatre - especially Augusto Boal’s Forum Theatre, as a means of dissemination.

The afternoon was a chance to begin to explore this more fully in my own workshop.

What I had discovered in the Berlin Council was that the exercises that I have been using in my writing workshops for years - to do with encouraging participants to develop their sense of self-worth, their capacity to respond to the present moment, their skills of listening to themselves and each other, and their capacity for empathy - that these exercises had an especial power in a transgender context.

As they had again: the stories we have to tell each other have the most extraordinary power.

That much is clear.

I loved the group that assembled in the room; and I was so moved that so many of them who came - people of every gender and none - were so committed to living outside gender boundaries and defying the pressures that had weighed so heavy on me. There was a liberating kind of energy to them that was a real inspiration.

The power of our stories was clear even in the next workshop, “Do it yourself! Exploring trans video blogs on You Tube as online activism as therapy”, which I had hoped would be another hands on workshop, but instead turned out to be a PhD student presenting the result’s of one year’s work into his thesis.

An interesting thesis; a door into another world; but somewhat dry.

Stephen Whittle’s lecture was cancelled, which was a shame; but actually very fortunate as it turned out because the programming of the second half of the afternoon was seriously top heavy.

Serious and important work here was being quite cursorily treated. Cultural activity is as crucial as political activity and needs to be programmed as such.

The next day’s Plenary seemed full of good intentions.

From the Swedish ombudsman: 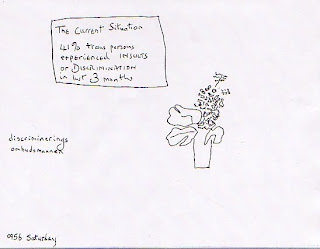 The flowers are a bit small because beyond the good intentions... I never quite discovered how her work actually operated in practice.

Amnesty had an even longer list of wonderful aspirations: 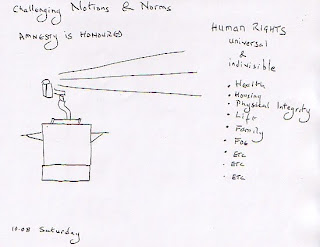 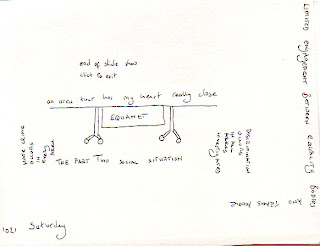 There were a lot of requests here for Trans people to come forward and engage.
Otherwise, they kept saying, we can do nothing.

But I know in myself that if in the past i have been wary of approaching Equality bodies or police bodies or any kind of body it’s because I do not trust them to understand my concerns, still less act on them.

But the last speaker cheered my heart (and if I knew how, this picture would be in glorious technicolour): 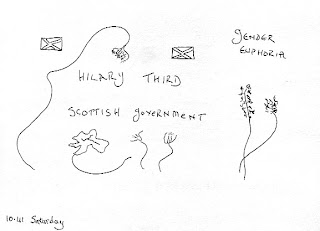 It made me incredibly proud to be Scottish, and in that room where there were representatives from at least 20 countries none of whom had in place a set of policies as progressive as our own.

Or an active, engaged, articulate, passionate and committed civil servant, speaking under her government banner, helping put them into practice.

We have so much to be grateful for: we are so fortunate that our constitution should have been put together at such a good historical time.


The afternoon was about genitals.

“Genital and Sexual Diversity” turned out to be over-subscribed: and understandably so.

My late partner, as a fierce feminist of the seventies, used to stand by two profound slogans that we would do well to consider:

THE PERSONAL IS POLITICAL

OUR BODIES OUR SELVES.


Attending the workshop brought back memories of how much I used to hate my body; of how strongly I had to assert myself with the surgeon who had simply taken it for granted, without even asking me or giving me the chance to speak, that I would want full Gender Re-Assignment Surgery, or, failing that, at the very least complete removal of my penis, testicles and scrotum.

As it turned out, my decision to have my testicles removed and retain penis and scrotum was the best I could have taken, though I had to take it blindly without information or advice.

What is abundantly clear is that the way we choose to live out our gendered identity is a powerful political statement; and that we need to seize our rights to determine our own bodies.

The workshop was short, overcrowded and over-ambitiously programmed and could barely begin to consider all the powerful, and potentially explosive, issues involved.

These issues of body politics deserve more space for discussion.

After a confused time looking for the Rainbow Festival parade (there seemed to be a slight lack of co-ordination here) myself and a companion went sightseeing.

I feel a little guilty confessing to this: but it was immensely helpful in terms of provoking thought around the issues of visibility and ‘passing’. Finding the courage and creating the safety, somehow, to be visible as a trans person is a powerful tool for changing people’s attitudes.

The paradoxes around this deserve some thought too.

The closing debate on the Sunday was one occasion when some of the tensions in the movement began to emerge to the surface. The treatment of the Turkish delegates by the police was still provoking powerful feelings; and there was a sharp division between those who saw value in a debate with the police and those who did not.

It was yet another moment when I felt grateful to be living here in Scotland. It amazes and cheers me to think that we have a lot of examples of good practice to communicate to the rest of Europe.

And I found myself trying to imagine an encounter between one of our trans police women and these delegates. It would be good to imagine the possibility of a fruitful dialogue.

Police are human beings just as we are; and it was a little disturbing to see so much hostility against and rejection of the experience of cis people. I hope the movement does not go much further down that path.

What also became apparent during this session is that “open discussion” is of only limited value. Dominant personalities and aggressive egos are as predominant and as unhelpful in the trans movement, too.
I started drawing the view across the harbour. 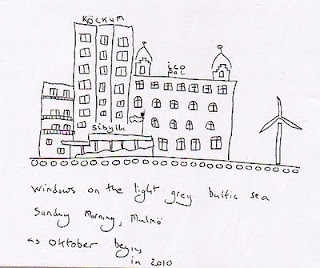 All our viewpoints are so diverse, and so different. But how wonderful we look out over a peaceful harbour.

And not, as before, over a wasteland of trenches, shell holes, and barbed wire.

The whole event left me with a feeling of hope:
a sense that our roots are deeper on solid ground even than we realise.

And that we are moving to somewhere good: 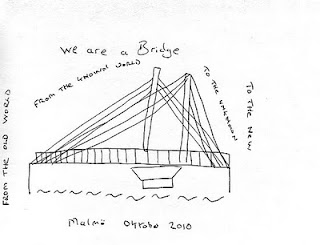 Attending such an event, I think, is a seriously empowering experience.

I have a sense that it’s altered and expanded my sense of my creativity (struck by the fact I’ve had to teach myself to use the scanner to incorporate my childish drawings into the text).

I also have a stronger sense of how my art is so crucial to my activism.

And how that, in turn, is central to my life work.

And that freedom for us trans people is integral to discovering freedom for everybody.
Jo Clifford. Edinburgh, 7th October.